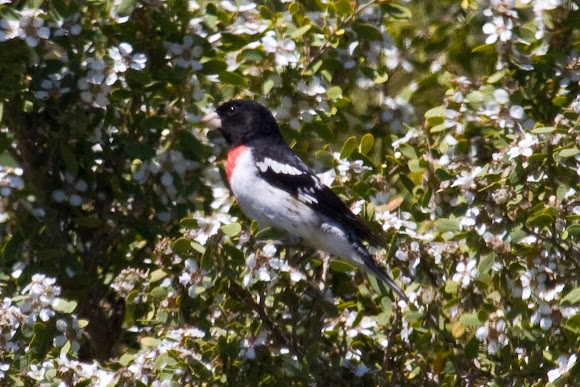 Adult birds are 18–22 cm (7.1–8.7 in) long, span 29–33 cm (11–13 in) across the wings and weigh 35–65 g (1.2–2.3 oz), with an average of 46 g (1.6 oz).[2][3] At all ages and in both sexes, the beak is dusky horn-colored, and the feet and eyes are dark.[4] The adult male in breeding plumage has a black head, wings, back and tail, and a bright rose-red patch on its breast; the wings have two white patches and rose-red linings. Its underside and rump are white. Males in nonbreeding plumage have largely white underparts, supercilium and cheeks. The upperside feathers have brown fringes, most wing feathers white ones, giving a scaly appearance. The bases of the primary remiges are also white.[1] The adult female has dark grey-brown upperparts – darker on wings and tail –, a white supercilium, a buff stripe along the top of the head, and black-streaked white underparts, which except in the center of the belly have a buff tinge. The wing linings are yellowish, and on the upperwing there are two white patches like in the summer male. Immatures are similar, but with pink wing-linings and less prominent streaks and usually a pinkish-buff hue on the throat and breast. At one year of age—in their first breeding season—males are scaly above like fully adult males in winter plumage, and still retail the immature's browner wings.[5] The song is a subdued mellow warbling, resembling a more refined version of the American Robin's (Turdus migratorius). Males start singing early, occasionally even when still in winter quarters. The call is a sharp pink or pick.[1]

Found in a migrant trap on the tip of Point Reyes National Seashore. Very rare visitor to the West Coast.