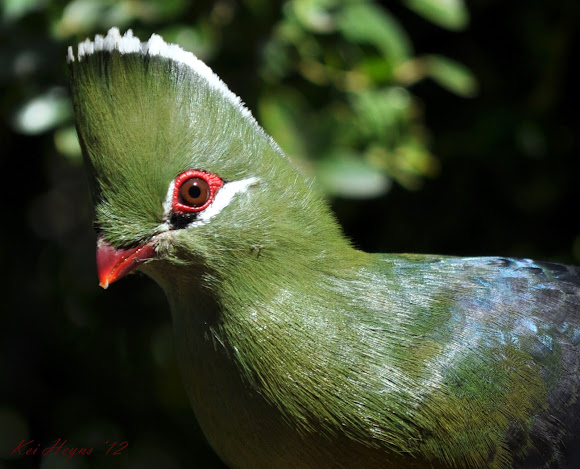 Endemic species of South Africa of the family Musophagidae. Brilliant flashes of the crimson primary feathers are strikingly revealed in flight. At rest it is recognised by its matt-green body and crested head with white markings. Upper tail and folded wings are an iridescent greenish blue; eye rings and bill are red. Fruit-eating birds (frugivorous) that have an agile springing action when jumping from branch to branch. The call is a hoarse "kow-kow-kow-kow" and a quieter "krrr" alarm note. Formally known as the Knysna Loerie in South Africa.

Usually occurs in pairs or family groups in montane mist-belt forests and evergreen forests in lowland and coastal regions.

I was very lucky this day to have this Knysna Turaco (Loerie) approach me so inquisitively, as they are very shy birds that prefer the cover of trees. Their call is a distinguishing aspect of the Southern Cape forest, where their call is echoed down valleys, only to hear another responsive call in the distance. The Knysna Turaco is particularly fond of the fruit from the Cape Ash tree (Ekerbergia capensis).

A beautiful species. Definitely something I'd enjoy seeing!

oh my gosh, this is so pretty!

Thank you everyone for your awesome comments! One of my favourite birds and very proud of this species.

Congratulations Kei! It is a remarkably beautiful bird and both the pictures and video are wonderful too. Thank you for sharing day and greetings. =)

Thank you everyone for your kind comments, what a privilege to have received this acknowledgment.

Oh! This is a favorite! Love those dramatic eyes. Congrats.

Congratulations ! beautiful bird - i love the touches of red under his wings ( on video). thanks for sharing this.

and 67 other people favorited this spotting