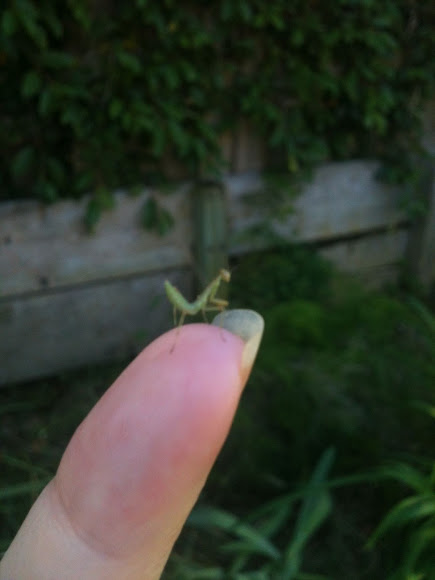 A praying mantis, or praying mantid, is the common name for an insect of the order Mantodea. The word is sometimes misspelled “preying” mantis, understandably since they are natural predators. They are in fact named for the typical "prayer-like" stance. The word mantis is actually derived from the Greek word mantis for prophet or fortune teller. The preferred pluralization is mantids, though there is some usage of mantes or mantises. The world's largest praying mantis was recorded at about 18 inches long, in Southern China, in 1929. That is almost the length of a human’s forearm! The preying mantis has a three segmented body, with a head, thorax and abdomen. The abdomen is elongated on which some praying mantis have wings as adults. Females have strong and large cerci. The first thoracic segment, the pro thorax is elongated and from it arises the modified spiked foreleg. Their famous forelegs is extraordinarily powerful for their size and crushes the prey in half. Their mouth parts have several strong cutting components to tear and consume through insect exteriors. Preying mantis, with their huge compound eyes mounted on the triangular, almost alien-like head, have a large field of vision. Their keen sight for detecting movement of prey and the flexible movement of the head to bring their prey into their binocular field of view are one of the keys to their hunting. They are able to turn their head 180 degrees for excellent vision and hearing. Their antennae are most likely used for smell. The movement and speed of the preying mantis as inspired many myths, stories, and superstitions. For centuries, praying mantises have been a staple of some styles of martial arts that mimic their fluidity. Southern Praying Mantis style is one particular mantis kung fu style that originated in Southern China. The natural lifespan of a praying mantis in the wild is about 10 - 12 months, but some mantids kept in captivity have been sustained for 14 months. In colder areas, female mantids will die during the winter. Males tend to suddenly die about 2 to 3 weeks after mating in the fall .

Praying mantises can be found in all parts of the world with mild winters and sufficient vegetation during the late spring to late summer months. Praying mantis will spend most of their time in a garden, forest or other vegetated area.

As noted above, praying mantises are often kept as pets, their unique behavior and appearance and entertaining hunting abilities making them popular in the exotic pet trade, even rivaling tarantulas and scorpions. An average-sized insect container or fish tank will make a great home. They require branches to climb on, insects to hunt and water to drink. They will drink sprayed water out of a bottle and eat crickets, grasshoppers, mealworms that are usually available in pet stores. Please note, the praying mantis has a insatiable appetite and if fed too much, their abdomen can be known to burst, killing the mantis. Hatchlings should ideally be fed on a diet of fruit flies or similar small flies.