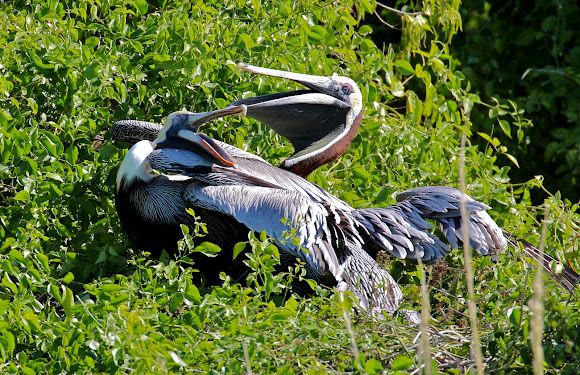 Brown Pelicans (female and male) mating. The brown pelican is the smallest of the eight species of pelican. Females and males look the same. The head is white but often gets a yellowish wash in older adult birds (like in this series). The bill is grayish overall in most birds, though breeding birds become reddish on the underside of the throat. The back, rump, and tail are streaked with gray and dark brown, sometimes with a rusty hue. In adult pelicans, the breast and belly are a blackish-brown and the legs and feet are black. The juvenile is similar but has a brownish-gray neck and white underparts.

Red Head Island, a small island, part of a group of islands in the North Sound of Antigua where brown pelicans nest year after year. The brown pelican lives on both coasts in the Americas.

They nest in colonies, often on islands and/or in mangroves. Male pelicans pick out the nesting sites and perform an "advertising" display which attracts the females. Once a pair forms a bond, overt communication between them is minimal. Pelican nesting peaks during March and April, but this colony nested and mated very early - this mating session was in January. Nests are in colonies either in trees, bushes, or on the ground; in this case the nests were on trees or bushes. There were about 20-25 nests in the colony.