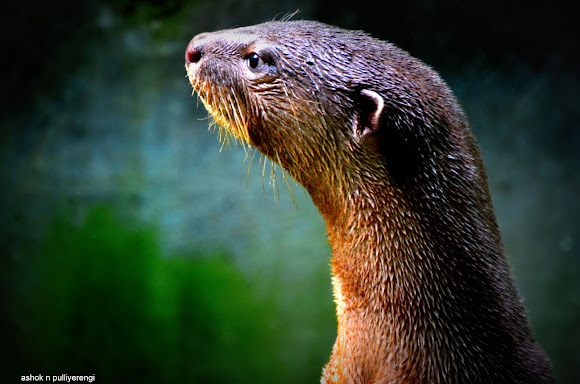 face of conservation ..photographed in kerala ..after incidence of people being bitten by this animal... It is in the five-kilometre-long reach of the canal that runs into Muvattupuzha River the presence of the animal, which is protected under the Wildlife Protection Act,has caused some panic but not much attention like one hears if a leopard or a tiger strays into human habitation .. The animals come in conflict with fishermen when they try to catch fish from the fishing nets. The animals themselves may get entangled in the net in the process,Forest Range Officer, kothamangalam Forest Range, who investigated the incidents, said that the practice of dumping waste from slaughter houses and poultry farms might have attracted the animals. The dormant males, staying away from the groups, would have bitten the bathers. The animals move in groups and feed mostly on fishes. They also feed on hare, aquatic birds and snakes. There were earlier reports from Kadalundi in Kozhikode where a group attacked and killed a dog.Smooth Coated Otters are the ones mostly found in the Kerala waters. The presence of Common Otter, which was first recorded in 1937, has not been reported since then. Small Clawed Otter’s presence has been reported from the High Ranges of the State.

Otters as wetland Ambassadors’The smooth-coated otter occurs along the large rivers and lakes, in mangrove forests along the coast and estuaries, and in Southeast Asia it even uses the rice fields for foraging .

Beautiful series Ashok N Pulliyerengi,congrats and thanks for sharing

This is a lovely and interesting spotting. To make it complete, and useful to researchers using this site for data, please edit this and add a reference about this species in the reference field of your spotting. Please do this for each photo you post. Thanks for helping to make Project Noah a complete reference tool for scientists.

Beautiful and the story was informative too.