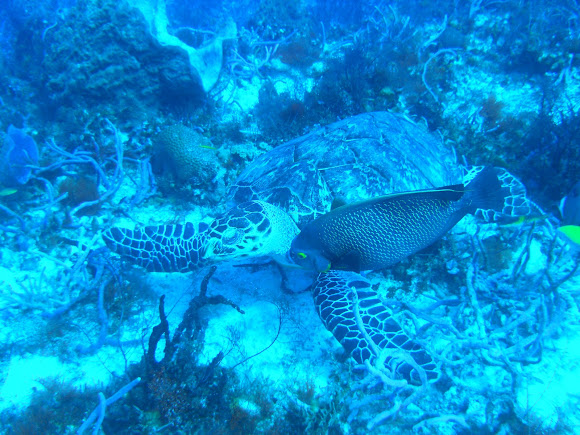 Adult hawksbill sea turtles have been known to grow up to 1 metre (3 ft) in length, weighing around 80 kilograms (180 lb) on average. The heaviest hawksbill ever captured was measured to be 127 kilograms (280 lb). The turtle's shell, or carapace, has an amber background patterned with an irregular combination of light and dark streaks, with predominantly black and mottled brown colors radiating to the sides. The hawksbill sea turtle has several characteristics that distinguish it from other sea turtle species. Its elongated, tapered head ends in a beak-like mouth (from which its common name is derived), and its beak is more sharply pronounced and hooked than others. The hawksbill's arms have two visible claws on each flipper.

In the Atlantic, E. imbricata populations range as far west as the Gulf of Mexico and as far southeast as the Cape of Good Hope in South Africa. They live off the Brazilian coast (specifically Bahia) through southern Florida and the waters off Virginia. The species' range extends as far north as the Long Island Sound and Massachusetts in the west Atlantic and the frigid waters of the English Channel in the east (the species' northernmost sighting to date). In the Caribbean, the main nesting beaches are in the Lesser Antilles, Barbados Guadeloupe, Puerto Rico (Mona Island), Tortuguero in Costa Rica, and in the Yucatan. They feed in the waters off Cuba and around Mona Island near Puerto Rico among other places.

Moved to Reptiles for you.