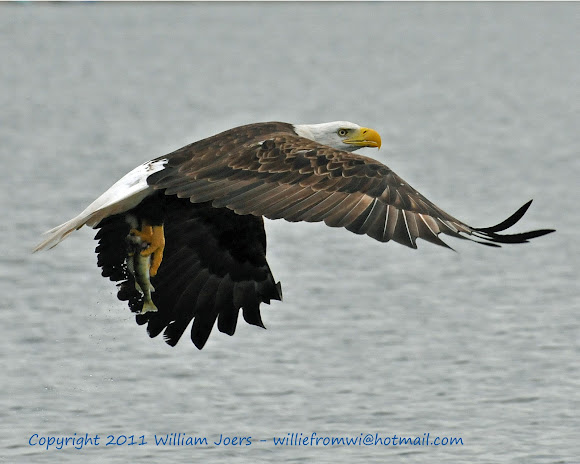 This sighting was made while we were fishing for dinner. We managed to catch a few fish, and so did this bald Eagle. Many times in the past I have been fishing and have witnessed an eagle take a fish much bigger then anything I was catching.This day it managed to catch a perch smaller then those I was catching. I did get the biggest catch of the day and it was not a fish, it was these captures of this awesome Bald Eagle.

I spend a lot of time trying to capture birds in flight, but it takes a lot of practice to get a good one. I want to "pile on" with everyone else, and say you nailed this one...Good Job!

A very very very belated Thank you pennymomof2, I used to see when people made a comment on my posts, but sadly they took that ability away from us several months ago. I would have responded sooner had I known.

Thanks Azura, Andrew and Gayle. Gayle, if you read this comment and wish to email me, I would gladly share some camera settings and tips with you on how to go about capturing birds in flight. Eagles because of their size are not nearly as hard to capture in flight as smaller birds. My email address is on my profile page. Just send me an email and let me know your interested in some camera settings and tips on eagle flight shots.

By far, the greatest set of photographs I have ever seen! WELL DONE!

I have worked at making photos of this magnificent bird for several years. They are so very swift that it is difficult to make a perfect shot. Great job!

Frank I believe this series was shot using a 70-300mm lens. I would have to double check to verify that. I am using a Nikon camera, set at continuous focus. I am spot focusing on the bird as well. If you wish to email, I would be happy to supply my camera settings if I do not have to dig to long to find them. I would love to own a 500mm lens, I can only imagine what my photos would be like if I had something that large. Anyway, my email address is williefromwi@hotmail.com. Email me if you wish.

I use a 500mm lens but am only able to capture a few good in-flight photos. Do you use the manual focus or automatic?

Thanks OnengDyah, and thank you so much FrankPortillo. Frank, I love wildlife, and birds are one of my favorite subjects. Capturing a bird in flight, is icing on the cake for me. I am thrilled you and so many others enjoy my efforts to capture the beauty I see in creation.

Your in-flight photographs are just awesome

Thank you Jolly, and Ashish

Normally I would thank each of you by name for your kind comments, this time, I will simply say, THANK YOU ALL!