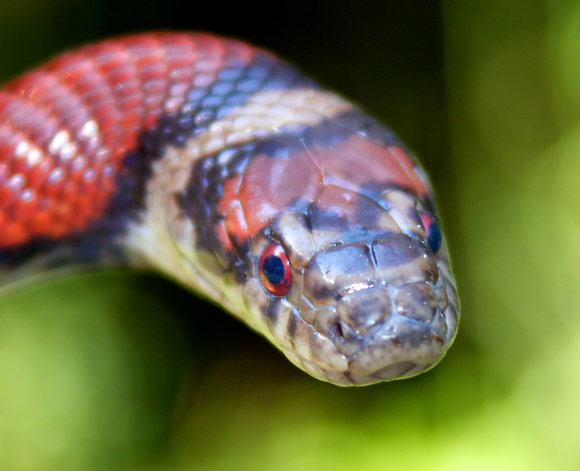 Spotted near a gravel bike path not too far from the Missouri River. Typically this species resides under rocks on rocky, south-facing hillsides. It also may live along the edge of forests where there are some rocks and logs. Winter dormancy is often spent in rodent burrows along rocky hillsides.

The red milk snake is often mistaken for a coral snake, a venomous species that does not occur in Missouri. At one time, some people thought that milk snakes and various subspecies had the ability to suck milk from cows. People now realize the improbability of this behavior and recognize it as only an old myth. Note: the location of this spotting is not exact. As part of good "herping ethics," I've chosen not to reveal the spotting location at the request of a friend who tipped me off to the location. (When news spreads of good herping locations in public forums, often collectors show up to add to their own collections or for profit opportunities in the pet trade or black markets)

Thanks Ken, this is one of my favorites. Yes, posting exact spotting locations has its advantages and disadvantages depending on the species and circumstances of the spotting. On the project noah blog, there is a post on this very topic: http://blog.projectnoah.org/post/3056774...

I like the way that you post approximate locations for reptiles to deter collectors. I plan to adopt this practice. You have some great postings, but I really like this milk snake.

@brandonryanfig01 it did not bite me, the snake was calm and docile. :)

Did you get bit

Thank you Melissa. This is one of my favorites!

I was on Project Noah earlier and didn't even see you got Spot of the Day! Congratulations! I just found out this minute. Awesome!

Awesome! Nothing like seeing a snake stretched out across the path.

Thank you Gopal, juanma1, and Laura!!!

Congrats sir..nice close up of very cute snake :)and the myth is very interesting in India also people offer milk as they worship them you can see one in the following link http://haisay.com/photo/3159/olny-in-ind...

Neil, congrats on Spotting of the Day! This is well deserved, what a beauty of a snake this guy is! Wish my connection would let me watch videos, it will have to wait until I'm home :) The photos are stunning though!

Thank you for your compliments manuelap1, Lars, Leuba, Willie, Larry, Maria, Ashish, Jellis, Atul, Shannon, Sachin, Satyen (and anyone I might have missed!). Know that your words here are very much appreciated!

My second comment, is to say Congrats Neil on your great series, and for SOTD

Congratulations, Neil! The video is a really nice addition!

In California we have one similar to that but it has a solid black face and it's called the California Mountain Kingsnake.