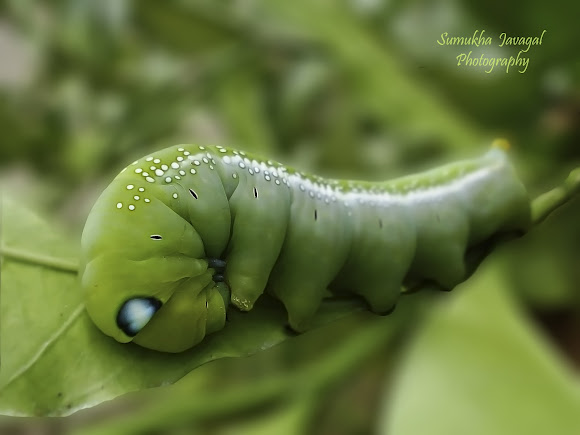 This Caterpillar was quietly sleeping after a good meal on a leaf. I silently took a snap of him without disturbing him. But somehow he got disturbed and woke up with an angry face. Then he calmed down and stretched his hand out for a handshake with a smiling face. After this he started munching on the leaf and he showed his mouth too..! The newborn caterpillars are pale blue. Their color changes to green as they grow. They have two spots resembling eyes on the forefront of their body which are called false eye..

Daphnis nerii is a large hawk-moth found in wide areas of Africa and Asia. It is a migratory species, flying to parts of eastern and southern Europe during the summer. Daphnis nerii (Oleander Sphinx Moth or Oleander Hawk-Moth) is one of the most beautiful butterfly-like patterned moths on Earth.

The caterpillars feed mainly on oleander (Nerium oleander) leaves, a highly toxic plant to which toxicity they are immune. They also may feed on most plants of the Apocynaceae family, such as Adenium obesum, and Tabernaemontana divaricata and Alstonia scholaris in India.

Thanks nrvero. Yes, It does look like a cartoon..!

I love the second picture!

Cute, but the third picture is a bit...creepy.

Yes Mona. It is very cute. Its false eyes make it more attractive..:)

Wow such a cute creature !

great series! thanks for sharing

Congrats for right honor for your efforts and organism...

Thank you so much everyone..! Im really honored with the winner of best pic of 2012 award for this pic..:)

Congratulations on this great honor, Sumukha!

Congratulations Sumukha! This great series has been chosen as the winner in the Best of 2012, arthropods category.

and 203 other people favorited this spotting