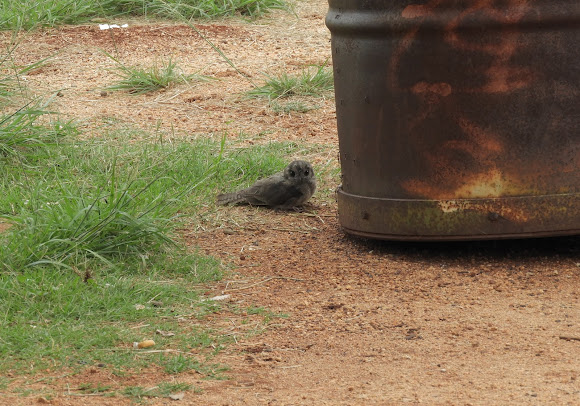 The sexes of these birds are similar. Female is a little bigger and is often of a more reddish tone. Apparently all red-phased birds are female. Plumage is variable - usually grey to a somewhat reddish tone. The upper parts are a soft, deep grey, finely speckled and barred with white, sometimes rufous. The head has a central black stripe, with two lateral black stripes, one over each eye meeting on the nape and subtended (be opposite to; to extend beneath) by grey-white to rufous collar. Cheeks are plain grey-white, often washed rufous. A series of ciliate vibrissae (cilia:- microscopic hair-like growths extending from the surface of a cell or organism. vibrissae:- stiff hair or hair-like projection.) curve up in front of the head and over the bill, from each lore (area between bird's eye and base of bill.) Dusky-grey flight feathers, spotted or toothed with ochre or rufous colouring. Underparts are white - either sparsely or densely speckled and barred with grey, particularly on the throat and breast, or washed a pale rufous colouring. Tail is a dusky-grey, lightly to brightly barred with pale to rufous-grey. Eye is a deep brown. The bill is sepia to dusky; base of mandible (either the upper or lower part of the beak in birds.) is flesh coloured and the palate (roof of the mouth.) is shaded pink-white. Feet are cream to pale grey-pink. Dusky coloured claws. Length about 210 - 250 mm, including long, rounded tail.

Picnic area at Mt. Wooroolin. Was in the cleared spot but surrounded by fairly scrubby land.

Known also as Owlet-nightjar; Crested Owlet-nightjar. Family name:- Aegothelidae ... This family's made up of small, long-tailed, nocturnal birds, with front-facing eyes, wide, soft bills with split pink palates and slit nostrils, at tip. When grooming, oil is obtained from the preen gland (which is at the base of the tail) which is present and large, without powder downs; no intestinal caeca (blind-ended pouch). The wings and tail are rounded. They are rather long-legged and long-toed, with outer forward toe irreversible. Various ways of hunting and feeding:- perch-and-pounce; in flight or running on the ground. Roosts and nests in clefts and hollows. The eggs are plain white. Both sexes share the nesting duties, feeding white-downed young, bill to bill, 'til the young have fledged. The Australian Owlet-nightjar has big, brown eyes and a black-striped crown, giving it an engaging appearance, like that of a small possum. It is a widespread, nocturnal (night-time) bird that is apparently rarely seen. It spends the day-light hours hiding in hollows of trees or stumps, which can be between two to eight metres off the ground. May also find it in cliff crevices or roofs of derelict homesteads. While resting, the A O-n crouches with the head erect and the feet tucked up under its breast. Occasionally, from its place of rest, you may hear loud churrs and, also, if you were lucky, you may even see the little bloke, sunning in the entrance of the resting place. Coming unexpectantly upon this bird may cause it to 'break' out without warning. It will then dash in a direct and undulating flight to another tree, diving into another hollow. This bird has a territory of 50 - 100 hectares, inhabited year in, year out and seems to know its territory very well. Australian Owlet-nightjars stay with the one partner and yet usually roost apart and alone, by day. Hunting is done in the first hours after dusk and the last hours before dawn. They are insect eaters and take in a wide variety:- grasshoppers, spiders, ants, beetles - to name a few. Their voice is a loud, two or three note rattling churring - chir - churr, on much the same pitch. Both sexes do this throughout the year. It is probably a territorial call. Also there is a sharp, high-pitched chirk-chirk-chirk or yuk. The young beg with soft, low trilling and the adult responds in kind. We rescued this little bloke from 'crow attack'. The vet checked it over, wildlife carer had it for a few days and then it was released back on Mt. Wooroolin. Reference:- Reader's Digest Complete Book of Australian Birds. Reader's Digest Great Illustrated Dictionary.