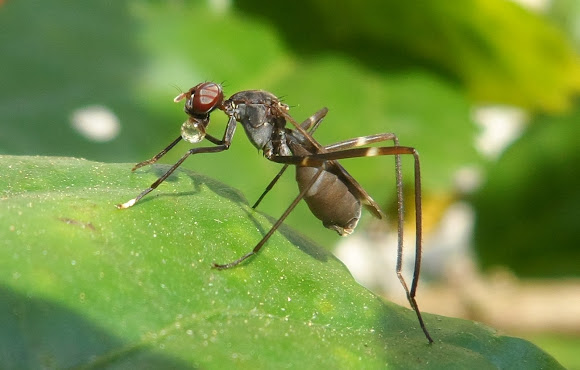 The Micropezidae are a moderate-sized family of acalyptrate muscoid flies in the insect order Diptera, comprising about 500 species in about 50 genera and 5 subfamilies worldwide, (except New Zealand and Macquarie Island). They are most diverse in tropical and subtropical habitats, especially in the Neotropical Region.

Insects in this family are commonly called stilt-legged flies, after their characteristically long legs. The fore legs are markedly smaller than the other pairs. Mostly they are long-bodied, often black flies, usually with infuscated (darkened) wings. Wings are reduced in the genera Calycopteryx and entirely absent in the ant-like Badisis ambulans.

Very slender small to large size (3mm.-16 mm.) flies with long thin legs and narrow wings. The head is small elongate or rounded. The antenna are small and the arista is bare or pubescent.Ocelli are present but ocellar bristles are absent. Vibrissae are absent and the postvertical bristles are divergent or absent. There are 0-3 pairs of frontal bristles,which curve forward or backward. Interfrontal bristles are absent .The wings are clear or with a smoky patterned. The costa is without interruptions.The subcosta is complete, its ending in the costa close to vein R1. The posterior basal wing cell and discoidal wing cell are sometimes fused. Crossvein BM-Cu present or ( Micropezinae) absent. The abdomen is long and narrow. The tibiae lack a dorsal preapical bristle.

Some species, much the same as in the strongylophthalmyiid genus, Strongylophthalmyia, mimic ants; others mimic wasps and are especially similar in appearance to some ichneumonid wasps. Species of the genus Anaeropsis have stalked eyes.

Little is known of the larval habits, but they are probably phytophagous or saprophagous in decayed vegetation, old manure or fungi . Larvae of certain Mimegralla species have been found to live in the roots of ginger and other plants, under the bark of dead trees or in other decaying material.Species of Micropeza have phytophagous larvae feeding in the root nodules of leguminous plants in open habitats.Species of Rainieria develop in rotting wood are found in old forests. Adults are either predaceous on small insects (for example Calobata in Britain or are attracted to excrement or decaying fruit. Adults are found on low herbage, flowers, leaves, rotting fruit and excrement.

Many species (for example those of genus Mimegralla) are known for their habit of standing motionless while waving their prominently marked front legs in front of their head, a behavior which contributes to their mimicry of wasps. At least one species of Metopochetus (M. curvus) was observed to wave its hindlegs instead, though these are not conspicuously colored.