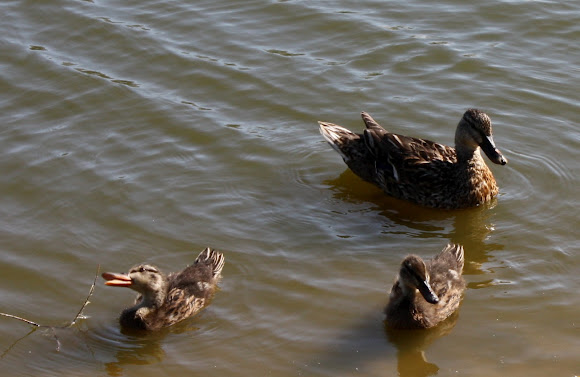 The female Mallard is a mottled light brown, like most female dabbling ducks, and has buff cheeks, eyebrow, throat and neck with a darker crown and eye-stripe. However, both the female and male Mallards have distinct purple speculum edged with white, prominent in flight or at rest (though temporarily shed during the annual summer moult). Upon hatching, the plumage colouring of the duckling is yellow on the underside and face (with streaks by the eyes) and black on the backside (with some yellow spots) all the way to the top and back of the head. Its legs and bill are also black. As it nears a month in age, the duckling's plumage will start becoming drab, looking more like the female (though its plumage is more streaked) and its legs will lose their dark grey colouring. Two months after hatching, the fledgling period has ended and the duckling is now a juvenile Breeding Female swimming with ducklings that are less than a week oldMallards usually form pairs (in October and November) only until the female lays eggs at the start of nesting season which is around the beginning of spring (early March to late May), at which time she is left by the male who joins up with other males to await the moulting period which begins in June. During the brief time before this, however, the males are still sexually potent and some of them either remain on standby to sire replacement clutches (for female Mallards that have lost or abandoned their previous clutch) or forcibly mate with females that appear to be isolated or unattached regardless of their species and whether or not they have a brood of ducklings. The nesting period can be very stressful for the female since she lays more than half her body weight in eggs. She requires a lot of rest and a feeding/loafing area that is safe from predators. When seeking out a suitable nesting site, the female's preferences are areas that are well concealed, inaccessible to ground predators, or have few predators nearby. This can include nesting sites in urban areas such as roof gardens, enclosed courtyards, and flower boxes on window ledges more than one story up, which the ducklings cannot leave safely without human intervention. The clutch is 8–13 eggs, which are incubated for 27–28 days to hatching with 50–60 days to fledgling. The ducklings are precocial and fully capable of swimming as soon as they hatch. However, filial imprinting compels them to instinctively stay near the mother not only for warmth and protection but also to learn about and remember their habitat as well as how and where to forage for food. When ducklings mature into flight-capable juveniles, they learn about and remember their traditional migratory routes (unless they are born and raised in captivity). After this, the juveniles and the mother may either part or remain together until the breeding season arrives. When they pair off with mating partners, often one or several drakes end up "left out". This group sometimes targets an isolated female duck, even one of a different species, and proceeds to chase and peck at her until she weakens, at which point the males take turns copulating with the female. Lebret (1961) calls this behaviour "Attempted Rape Flight" and Cramp & Simmons (1977) speak of "rape-intent flights". Male Mallards also occasionally chase other male ducks of a different species, and even each other, in the same way. In one documented case of "homosexual necrophilia", a male Mallard copulated with another male he was chasing after the chased male died upon flying into a glass window. Mallards are opportunistically targeted by brood parasites, occasionally having eggs laid in their nests by Redheads, Ruddy Ducks, Lesser Scaup, Gadwalls, Northern Shovelers, Northern Pintails, Cinnamon Teal, Common Goldeneyes, and other Mallards. These eggs are generally accepted when they resemble the eggs of the host Mallard, although the hen may attempt to eject them or even abandon the nest if parasitism occurs during egg laying. Mallards of all ages (but especially young ones) and in all locations must contend with a wide diversity of predators including raptors, mustelids, corvids, snakes, raccoons, opossums, skunks, turtles, large fish and felids and canids, including domesticated ones. The most prolific natural predators of adult Mallards are Red Fox and hawks, although both kill far fewer than human hunters.

The Mallard or Wild Duck (Anas platyrhynchos) is a dabbling duck which breeds throughout the temperate and subtropical Americas, Europe, Asia, and North Africa, and has been introduced to New Zealand and Australia. This duck belongs to the subfamily Anatinae of the waterfowl family Anatidae.

spotted in the porto city park

I agree with Mallard hen and two juvies.

so it's id :) even without Liam opinion with Jellis and yours suggestion i'am convinced :) thanks both,can you se the other two i spotted Emma,i think one is hibrid,or juvenil male :)

thanks Jellis for your suggestion

my opinion yes it looks like a female and to young Mallards.