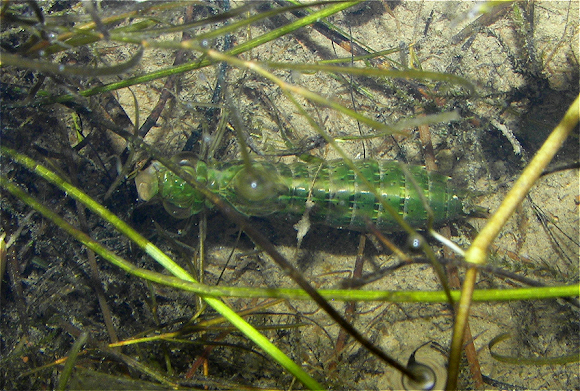 The larval stage can last two to three years. Nymphs will molt around twelve times before reaching adulthood. They feed on tadpoles, fish eggs, and other aquatic insects.

It's hard to see in the first photo, but it's eating a water boatman. The one in the second photo had turned toward another type of water-dwelling larva (the type that build a "house" around themselves using debris), who quickly noticed it and dropped off the rock and went to hide!

Cool, thanks! Probably a green darner nymph, then. We have quite a few of the adults around right now, but they're so hard to photograph.

Yes, the green ones are dragonfly nymph, maybe a darner like this one: