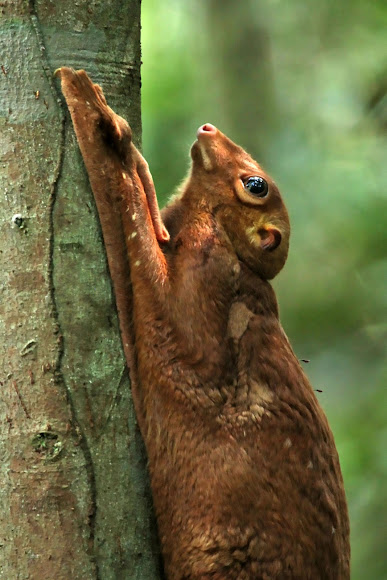 Sunda flying lemurs, a species of colugo, are, despite their name, not true lemurs. Only two species of colugo exist - the Philippine and this - and both are threatened by habitat destruction. Neither are currently listed on the IUCN Red List, though the Philippine flying lemur was briefly classified as vulnerable from 1996 to 2008. The Sunda Flying Lemur is found in two 'morphs', a red and grey. This is - quite obviously - a red morph. As a general rule of thumb, red lemurs are usually males and grey lemurs female, though red lemurs have been observed with babies and this may be mere superstition. These lemurs do not actually fly; instead, they glide from tree to tree, making use of flaps between their arms. They are the most ably gliding flying mammal. Being nocturnal, actually spotting them gliding is somewhat difficult, and they are more likely to be seen clinging to a tree in the daytime. Their gliding ability is thought to increase their access to food resources while decreasing their accessibility to potential predators, as these lemurs are helpless on the ground. They are able climbers.

Colugos are dependent on forest habitats, though they may be observed in plantations or on the very fringes of woodlands. Within Singapore, they are classified as vulnerable, forming a small population of about 1500.

This colugo briefly moved to the opposite side of the tree away from us before scuttling back to our side. It appeared to be adopting the classical 'freezing' defense mechanism, hoping not to get noticed. This was somewhat useless as it was a mere ten metres away from the trail at eye level and had been discovered by a group of 'nature-crazy' people. This was my first colugo!

Oh, sorry DanielePralong! My apologies. I will correct that now! I'm delighted to hear you read her blog post - we really enjoyed ourselves.
And thank you so much LisaPowers for this amazing honor. PN is such a delight to participate in and I look forward to seeing what adventures it brings me on next.

Hi duttagupta35504! I've read with great interest your friend mynatureexperiences's blog entry about this great encounter. It seems you do not have the correct spotting date here on Project Noah. Thanks in advance for correcting it!

Congrats! This spotting has been featured as a PN Fact of the Day:

Project Noah Fact of the Day: Oh my! The way we misnomer things sometimes is just crazy! The flying lemur is not really a lemur, nor does it really fly! Also known as a colugo, there are two species: the Philippine species Galeopterus volans and the Sunda (aka Malayan) flying lemur. They belong to the order Dermoptera. Much like flying squirrels, they glide from tree to tree and have loose folds of skin that assist in this. They are vegetarians.

Thank you NuwanChathuranga! There I have to thank the colugo for getting so close.