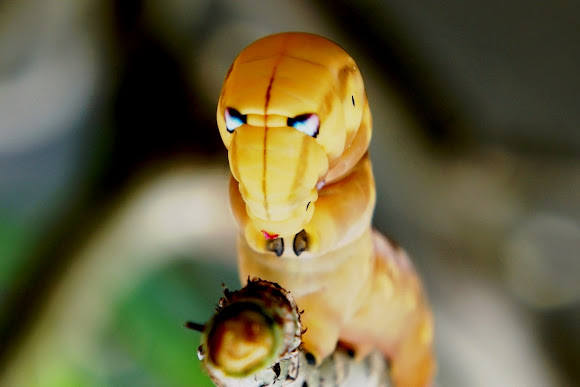 Daphnis nerii is a large hawk-moth found in wide areas of Africa and Asia. It is a migratory species, flying to parts of eastern and southern Europe during the summer. The caterpillars feed mainly on oleander (Nerium oleander) leaves, a highly toxic plant to which toxicity they are immune. They also may feed on most plants of the Apocynaceae family, such as Adenium obesum, and Tabernaemontana divaricata and Alstonia scholaris in India. The newborn caterpillars are pale blue. Their color changes to green then brownish-yellow as they grow. They have two spots resembling eyes on the forefront of their body.