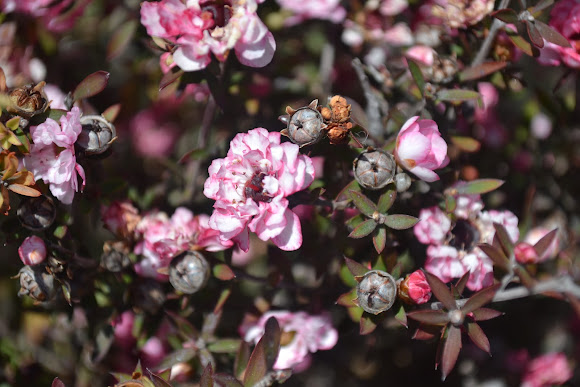 Leptospermum scoparium (manuka, manuka myrtle, New Zealand teatree, broom teatree, or just tea tree or Leptospermum) is a shrub or small tree native to New Zealand and southeast Australia. Evidence suggests that L. scoparium originated in Australia before the onset of the Miocene aridity, and dispersed relatively recently from eastern Australia to New Zealand. It is likely that on arrival in New Zealand, L. scoparium became established in limited edaphically suitable areas until the arrival of Polynesian man, whose fire and forest-clearing brought about the low-nutrient-status soils for which it was preadapted in its homeland. It is now found throughout New Zealand, but is particularly common on the drier east coasts of the North Island and the South Island, and in Australia in Tasmania, Victoria and New South Wales. Manuka (from Māori mānuka) is the common name used along with "jelly bush" and "tea tree" in Australia and to a lesser extent also in New Zealand. This name arose because Captain Cook used the leaves to make a 'tea' drink. The common name "tea tree" is also shared with the related melaleuca tree of Australia, suggesting that both were used to make tea by Captain Cook.