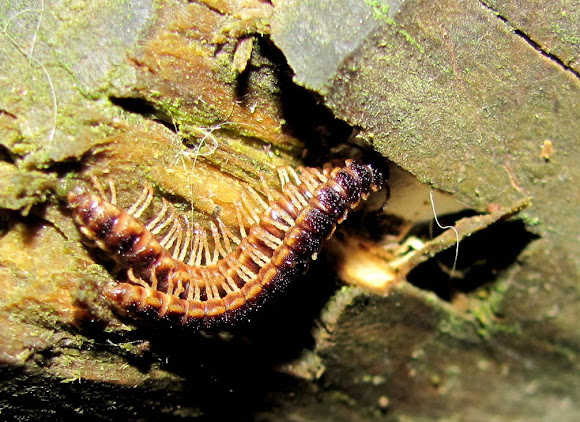 The species has alternating bands of black and yellow-gold.[6] At approximately 10-15 cm, Scolopendra cingulata is one of the smallest species in the family Scolopendridae. Its venom is also not as toxic as that of other scolopendrid centipedes

Behaviour This species is fast and aggressive. Diet Scolopendra cingulata is an opportunistic carnivore. It will attack and consume almost any animal that is not larger that itself. These include insects and small lizards. spotted in my backyard

thanks Allison for the id

thanks very much Mayra,my wife as terror of these ones,she was bited once and it's very painful,it make a little noddle mark in the skin that last for weeks,thanks for the id

I was used to live in Guadeloupe where you find a lot of these. There not agressive but if they can bite if they are scared. Be careful those bites are very painful.