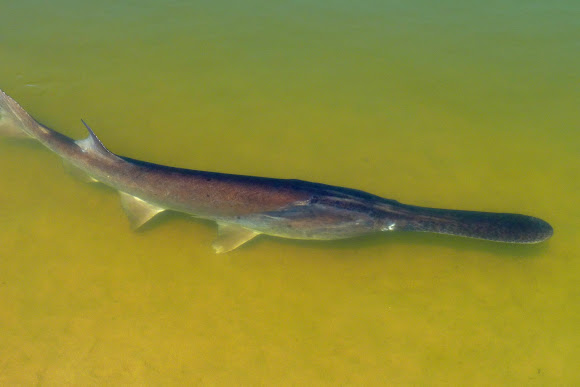 Eight of these amazing prehistoric freshwater fish were spotted near the Missouri river in very shallow water. They ranged in size from about 3 feet (1 meter) to about 5 feet (1.5 meters). However, this large fish may grow to 220 cm (7 feet) and weigh up to 100 kg (220 pounds). The American paddlefish is one of two living species of Paddlefish; the other is the possibly extinct Chinese Paddlefish. It is listed as "Vulnerable" throughout the entirety of its range in North America.

Spotted in a large scour hole about 20 meters from the Missouri River. Inhabits slow-flowing waters of large rivers. This fish is currently found in 22 North American states that are part of the Mississippi River Drainage.

This fish is one of the few freshwater fish to feed by straining plankton from the water, which it does by sweeping through the water with its lower jaw dropped and the sides of the head inflated, allowing it to filter feed and ventilate its gills simultaneously

Wonderful fish photo of one of my favorite fish....

Thanks so much Leanne! And thank you too annorion for the information. I hadn't read that, but it definitely makes sense. Those Asian carp are by far the most dominant fish species we see.

Asian carp (invasive) are also a threat to paddlefish because they compete for the same plank-tonic food source.

What a find! Congratulations Marylou. I think this spot is just awsome! Great info & video too. Thanks for sharing :)