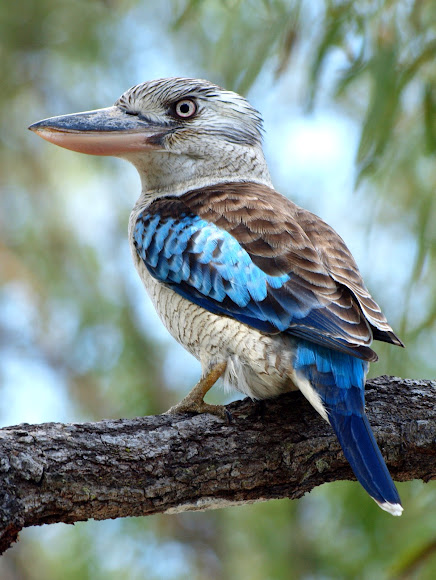 The Blue-winged Kookaburra is a large kingfisher with a big square head and a long bill. It has a distinctive pale eye. The head is off-white with brown streaks, the shoulders are sky blue and it has a uniform blue rump.The throat is plain white and the underparts are white with faint scalloped orange-brown bars.The back is mid brown. Males have a dark blue tail while females' tails are barred red-brown or blackish. Otherwise the sexes are similar. The legs and feet are grey and the bill is dark above and yellowish below. Juveniles have paler streaks on the head with darker mottlings. There is slight geographical variation with plumage more buff in north-western Australia (race clifoni). The Blue-winged Kookaburra is also known as the Barking or Howling Jackass or Leach's Kookaburra. As they are shy and often quiet in the foliage they may be overlooked.

Feeding: Blue-winged Kookaburras eat a wide range of invertebrates and vertebrates. They consume mainly insects, reptiles and frogs in the wetter months, and fish, crayfish, scorpions, spiders, snakes, earthworms and small birds and mammals at other times. After a controlled dive with their bill open, food is grabbed from the ground. The bill has a special groove near the end of the upper mandible which helps in holding prey. After returning to a perch, the prey is beaten and then swallowed. They show extra care when snakes are the prey. Pellets of undigested items are regurgitated and found beneath daytime perches, roosting sites and nests. Breeding: The nest site of the Blue-winged Kookaburra is mostly high (to about 25 m) up in natural tree hollows, sometimes in tree termite nests, or in a hole cut into the soft wood of a baobab tree. Typically, the floor of the chamber is lower than the entrance, with an overall length of 50 cm. The breeding pair share the incubation of the eggs and subsequent feeding, which extends for one to two months, and are often assisted by auxiliaries (helpers), mainly from the previous year's clutch.

That would be fine Angie

Hi! My name is Angie Peace, and I am an emerging natural science artist in North Bend, Washington, USA. My cousin has commissioned me to do a blue-winged kookaburra and I am wondering if you would allow me to use one of your photographs as a reference photo for my drawing. If so, would you be willing to share a higher resolution photo with me? If you'd like to see examples of my work, my portfolio can be viewed at www.angipeace.com. Thanks so much in advance; beautiful work!!!

What a beautiful series! He is gorgeous!

Wow! Congrats on the spotting of the day.

Thanks Aakash, the camera I use is an Olympus E620

@Mac Can you please tell us which camera do you use??

Thanks to all for your comments on this spotting.

Congratulations on your SOTD.