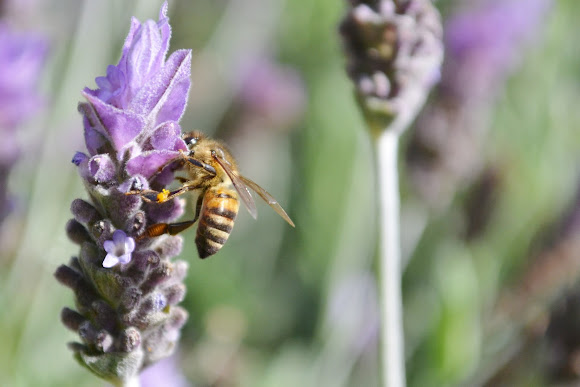 A single African bee sting is no more venomous than a single European bee sting, though African honeybees respond more quickly when disturbed than do EHBs. They send out three to four times as many workers in response to a threat. They will also pursue an intruder for a greater distance from the hive. Although people have died as a result of 100-300 stings, it has been estimated that the average lethal dose for an adult is 500-1,100 bee stings.

The African bee is being threatened by the introduction of the Cape honey bee into northern South Africa. If a female worker from a Cape honey bee colony enters an African bee nest, she is not attacked, partly due to her resemblance to the African bee queen. Now independent from her own colony, she may begin laying eggs, and since A.m. capensis workers are capable of parthenogenetic reproduction, they will hatch as "clones" of herself, which will also lay eggs.

Im not sure if this is indeed the Cape bee, as I live in the Cape. I wonder if this one has fooled me too. ;)