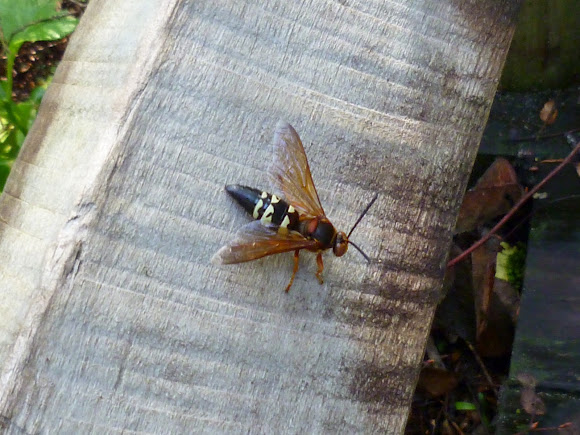 A large solitary wasp that hunts cicadas and can be as long as 2 inches. The female uses her sting to paralyze prey rather than to defend her nest and they are not aggressive towards humans. Her hind legs are equipped with special spines that help her push dirt from her burrow. Males do not have a sting but they are always searching for a mate and my buzz around people leading to the impression that they will attack. Adults feed on flower nectar and plant sap.

The cicada killer will burrow into well-drained, sandy soils or loose clay in bare or grass-covered banks, berms and hills as well as next to raised sidewalks, driveways and patio slabs.

After digging a burrow and nest chamber, a female cicada killers captures a cicada, paralyzing it with a sting. She holds it upside down beneath her and takes off toward her burrow. The cicada can be more than twice her weight. After putting one or more cicadas in her nest cell, the female deposits an egg on a cicada and closes the cell with dirt. Male eggs are given a single cicada but female eggs get two or three cicadas because they are much larger and need more food. A single burrow may eventually have 10 or more nest cells. The egg hatches in one or two days and the grub feed on the paralyzed cicadas. Larvae undergo pupation in the burrow and emerge in the spring. There is only one generation per year.

Hi KarenPuracan, can you send me a link to that mission?
thanks

Consider adding this to the "Florida's Native Bees and Wasps" mission..?