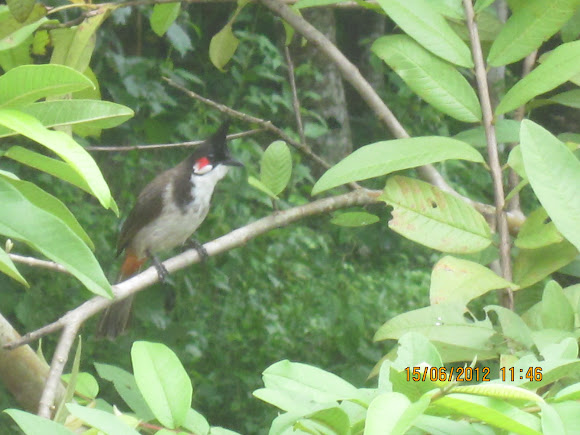 The Red-whiskered Bulbul is about 20 centimetres (7.9 in) in length. It has brown upper-parts and whitish underparts with buff flanks and a dark spur running onto the breast at shoulder level. It has a tall pointed black crest, red face patch and thin black moustachial line. The tail is long and brown with white terminal feather tips, but the vent area is red. The loud and evocative call is a sharp kink-a-joo and the song is a scolding chatter. It is more often heard than seen, but will often perch conspicuously especially in the mornings when they call from the tops of trees. The life span is about 11 years. Hybrids have been noted in captivity with Pycnonotus cafer, Pycnonotus leucotis, Pycnonotus xanthopygos, Pycnonotus melanicterus and Pycnonotus leucogenys[10] and leucism has been recorded. Several avian malaria parasites have been described from the species.

Thank you so much!!! I have edited the spotting. :)