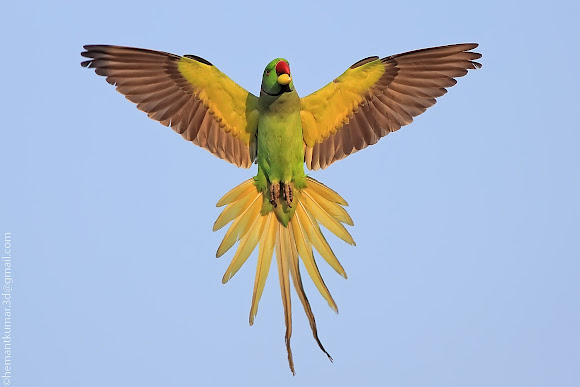 The Rose-ringed Parakeet (Psittacula krameri), also known as the Ring-necked Parakeet, is a gregarious tropical Afro-Asian parakeet species that has an extremely large range. Since the trend of the population appears to be increasing, the species was evaluated as Least Concern by IUCN in 2012. Rose-ringed parakeets are popular as pets. Its scientific name commemorates the Austrian naturalist Wilhelm Heinrich Kramer. This non-migrating species is one of few parrot species that have successfully adapted to living in 'disturbed habitats', and in that way withstood the onslaught of urbanisation and deforestation. In the wild, this is a noisy species with an unmistakable squawking call.(Wikipedia)

This is super Hemant! Congrats on SOTD!

Beautiful photograph! Congrats on the SOTD.

Beautiful capture HemantKumar,congrats on another SOTD and thanks for sharing

Absolutely gorgeous! What a timing you got here, Hemant! Congratulations on the sotd, my friend. Beautiful species, beautiful shot.

Congrats on your SotD nod. Absolutely fantastic shot!! These birds are in many urban areas here on the island of Oahu, Hawaii. They blend in so well in the trees, too.

Beautiful and Congratulations on SOTD

Congratulations to a very nice photo and the spotting of the day! Very well deserved :)
Happy holidays!

Congrats Hemant, your great timing has earned you Spotting of the Day honors!

A rose-ringed parakeet takes to the air in our spotting of the day! This is one of the few parrot species that have successfully adapted to living in urban areas as their natural forest habitats disappear.

Beautiful, it looks bigger than a parakeet... in the picture!! Thank you for sharing, HemantKumar.