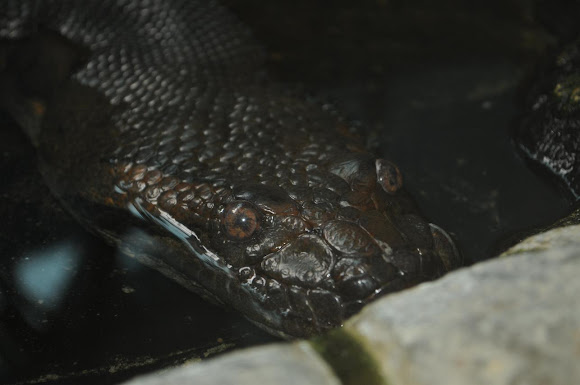 The Green Anaconda is one of the world's longest snakes, reaching more than 6.6 m (22 ft) long. Reports of anacondas 35–40 feet or even longer also exist, but such claims need to be regarded with caution as no specimens of such lengths have ever been deposited in a museum and hard evidence is lacking. There is a $50,000 cash reward for anyone that can catch an anaconda 30 ft (9.1 m) or longer, but the prize has not been claimed yet. Although the reticulated python is longer, the anaconda is the heaviest snake. The longest (and heaviest) scientifically recorded specimen was a female measuring 521 cm (17 ft 1 in) long and weighing 97.5 kilograms (215 lb). The color pattern consists of olive green background overlaid with black blotches along the length of the body. The head is narrow compared to the body, usually with distinctive orange-yellow striping on either side. The eyes are set high on the head, allowing the snake to see out of the water while swimming without exposing its body. (information from Wikipedia)

This snake was spotted at National Zoo in Washington, D.C..