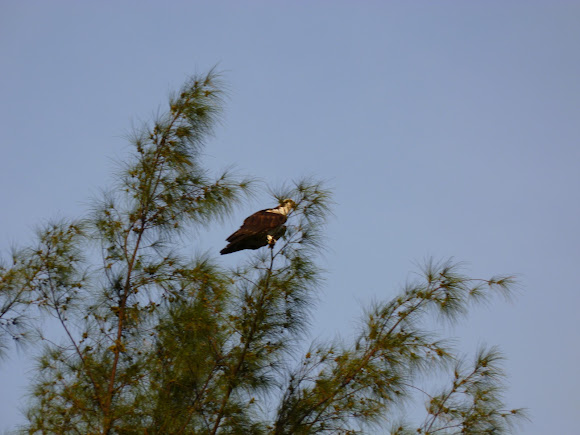 A large raptor with a wing span of 4 1/2 - 6 feet. The wings and back are blackish brown and the underparts are a glossy brown with a white breast. Its head is mostly white with a distinct black band that passes over the cheek and eye. Osprey have golden brown eyes, a black beak, white feet with black talons. The call is a series of sharp whistles. It hovers on beating wings and plunges feet first into water to grab fish. Ospreys have an outer toe that is reversible allowing them to grasp their prey with two toes in front and two behind. This makes them very proficient at grabbing slippery fish from the water and hanging on to them as they fly off to a nearby branch to feed. Their nest is a large heap of sticks, driftwood and and plant material built on tall structures like the forks of trees, rocky outcrops, utility poles, artificial platforms. They mate for life and raise the chicks together.

The osprey tolerates almost any habitat near water where it can hunt. It is most often seen along rivers, lakes and coastlines. It has a worldwide distribution and is found in temperate and tropical regions of all continents except Antarctica.