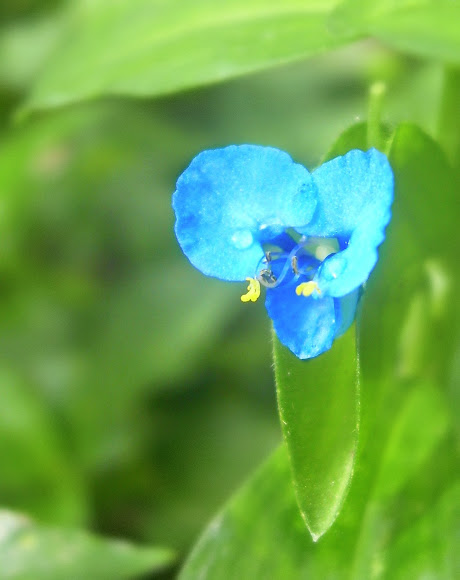 Commelina diffusa, sometimes known as the climbing dayflower or spreading dayflower, is a pantropical herbaceous plant in the dayflower family. It has been introduced to the southeastern United States where it is most common in wet disturbed soils. There are two recognised varieties, one being the type and the other being C. diffusa var. gigas, which is native to Asia and has been introduced to Florida. It flowers from spring to fall and is most common in disturbed situations, moist places and forests. In China the plant is used medicinally as a febrifuge and a diuretic. A blue dye is also extracted from the flower for paints. In the Hawaiian Islands, it is known as "honohono grass", although it is technically not a grass. "Honohono" refers to the alternating structure of the leaves. At least one publication lists it as an edible plant in New Guinea.

The plant is present in tropical and subtropical locations worldwide. It can be found throughout much of southern China, specifically in the provinces of Guangdong, southwestern Guangxi, southwestern Guizhou, Hainan, southeasten Xizang and southeastern Yunnan. It is native in parts of the West Indies, including much of Puerto Rico and several of the Virgin Islands such as Saint Croix, Saint Thomas and Tortola.