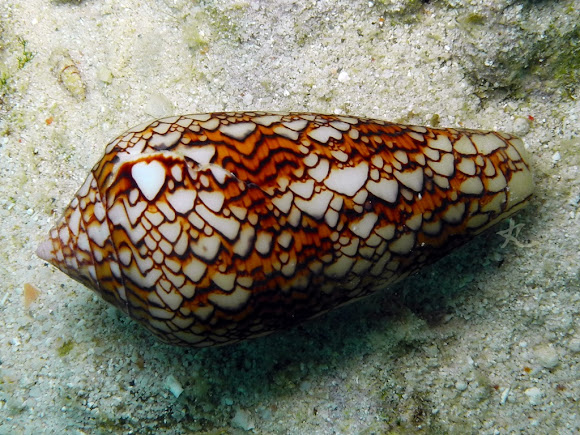 Also known as Cloth-of-gold Cone, this mollusk is extremely dangerous when handled as it can sting humans with a deadly toxin. Its proboscis can be extended to any part of its shell. Its shell, which has a moderately high spire and pointed apex, is patterned with yellow-orange and black triangles and irregular bands. C. textile is carnivorous and eats snails. It can bore a hole into other mollusks, such as cowries, and inject a conotoxin to kill its prey.

I saw this shell (already absent its original occupant) in less than 7m of water. It was still in pristine condition. I'd really love to be able to capture a live specimen on video one of these days!

Project Noah Fact of the Day: The textile cone snail (Conus textile) is a venomous predator of the ocean. It can be found in the waters of the Red Sea, Indo-Pacific, Australia, New Zealand, the Indian Ocean from eastern Africa to Hawaii, and French Polynesia. It's venom, conotoxin, is extremely dangerous to humans so this snail should not be handled.