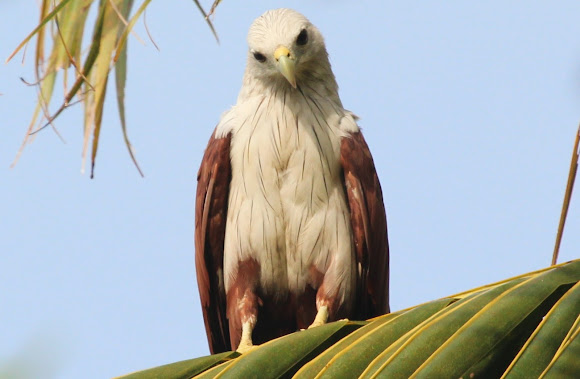 The Brahminy Kite is distinctive and contrastingly coloured, with chestnut plumage except for the white head and breast and black wing tips. It is primarily a scavenger, feeding mainly on dead fish and crabs, especially in wetlands and marshland but occasionally hunts live prey such as hares and bats. They may also attempt to steal prey from other birds. A rare instance of a bird feeding on honey has been recorded. Young birds may indulge in play behaviour, dropping leaves and attempting to catch them in the air. When fishing over water, they may sometimes land in the water but manage to swim and take off without much trouble.

Known as Elang Bondol in Indonesia, the Brahminy Kite is the official mascot of Jakarta. In India it is considered as the contemporary representation of Garuda, the sacred bird of Vishnu. In Malaysia, the island of Langkawi is named after the bird ('kawi' denoting an ochre-like stone used to decorate pottery, and a reference to the bird's primary plumage colour). A fable from central Bougainville Island relates how a mother left her baby under a banana tree while gardening, and the baby floated into the sky crying and transformed into Kaa'nang, the Brahminy Kite, its necklace becoming the birds feathers.

Thanks Hemma and Arun.

Beautiful picture of this lovely bird.

fantastic man! what kind of lens if you dont mind my asking?

Beautiful bird and great information. Thank you for sharing your wonderful pictures.

Thanks Atul, DiveMUster, Chief Red Earth, Azura Firdaus W and Ava. Chief, I am sure this is a very good omen for me :-)

Beautiful picture and I love your notes.