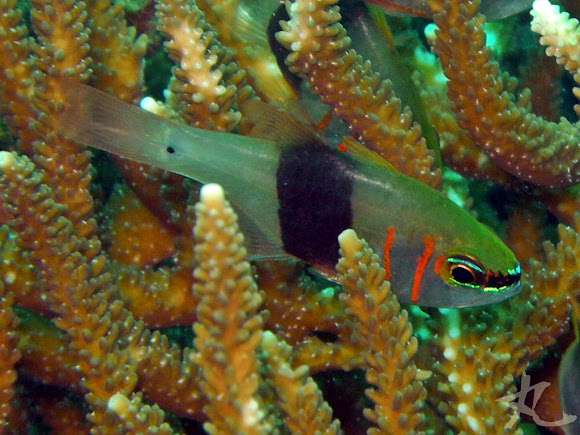 Also known as Blackbelted Cardinalfish, the black band below its second dorsal fin varies in width, and may even be absent. However, its distinctive markings are always visible: the two narrow vertical orange stripes next to its gills and the small black dot at the base of its tail. This species feeds nocturnally and grows to a maximum of 8cm in length.

Girdled cardinalfish form large schools above or among the branches of Porites cylindrica and other branching coral (eg., Acropora), in sheltered lagoons and inshore bays; also over sandy bottoms at depths of 1 to 40m. Distribution: the Western Pacific, from Indonesia to Vanuatu, north to the Ryukyu Islands, and south to Australia.

Spotted this school of girdled cardinals among the long branches of staghorn coral (possibly Acropora cervicornis), in about 12m of water at the dive site called Marissa 2 (off the western coast of Samal Island).