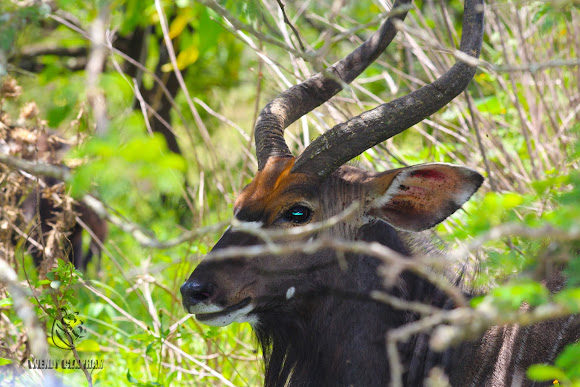 The nyala is mainly active in the early morning and the late afternoon. It generally browses during the day if temperatures are 20–30 °C (68–86 °F) and during the night in rainy season. As a herbivore, the nyala feeds upon foliage, fruits and grasses, with sufficient fresh water. A shy animal, it prefers water holes rather than open spaces. The nyala does not show signs of territoriality, and individual areas can overlap each other. They are very cautious creatures. Old males live alone, but single sex or mixed family groups of up to 10 individuals can be found. These inhabit thickets within dense and dry savanna woodlands. The main predators of the nyala are lion, leopard and Cape hunting dog, while baboons and raptorial birds hunt for the juveniles. Mating peaks during spring and autumn. Males and females are sexually mature at 18 and 11–12 months of age respectively, though they are socially immature until five years old. After a gestational period of seven months, a single calf is born.