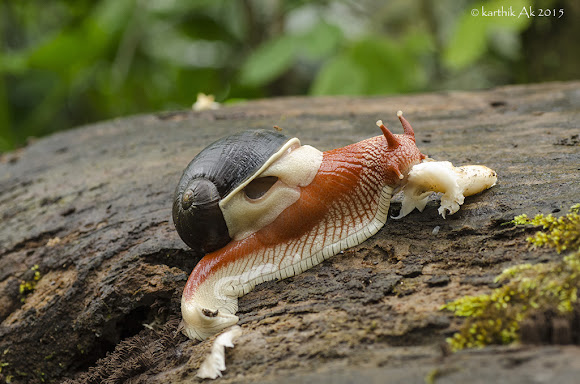 These snails are common throughout the western ghats and can be seen in large numbers during the monsoons feasting on the fungi/mushroom that grows on the dead/living tree. It is native species and found only in the western ghats of India. These are one of the largest snails in India. Unlike the invasive species of snails these snails donot destroy the plants instead as i said earlier will feed on fungi, thereby protecting the trees form parasitic fungi. These are snails bright red in color and rarely can be seen in pale yellowish red color.

Beautiful! Congrats for being nominated for SOTW!

Now that is a beautiful snail! Thank you for sharing :)

Absolutely beautiful Karthik - good job ! The information you've given makes the spotting outstanding. Thanks for sharing this.

Gosh is that beautiful!