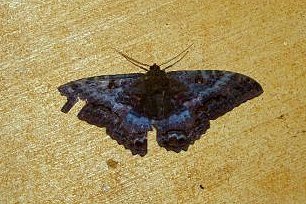 Found in Central America and Mexico, not native to Hawaii. Migrates north to southern American states during late spring and summer.

In many cultures, one of these moths flying into the house is considered bad luck. Found on the cement outside, not sure if it beat itself up on the light fixtures or had a run-in with a bird. Second photo is un-cropped, original version of the photo.