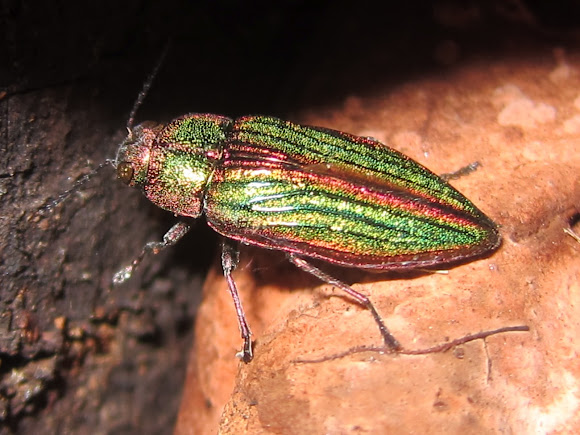 For my 1000th spotting I have the Golden Buprestid Beetle. This beetle was sitting on a mushroom on a fallen tree in Butano State Park, Pesdacdero, CA. As I was walking by a glint of green caught my eye. A beautiful jewel!

Buprestidae is a family of beetles, known as jewel beetles or metallic wood-boring beetles because of their glossy iridescent colors. The family is among the largest of the beetles, with some 15,000 species known in 450 genera. In addition, almost 100 fossil species have been described. The larger and more spectacularly colored jewel beetles are highly prized by insect collectors. The elytra of some Buprestidae species have been traditionally used in beetlewing jewellery and decoration in certain countries in Asia, like India, Thailand and Japan. Wikipedia

Thank you so much YukoChartraw!

Thank you Antonio and asergio!

Congratulations, Misako, and welcome to the 1000 spottings tribe. That is a great achievement. I love to see how people is commited to PN.

Wow Misako,great cache and awesome spotting,perfect to the ocassion,1000th spottings is a great number,congrats and thanks for sharing such an amazing spotting page with all of us

Congratulations on your spotting #1000

Thank you so much Mark Ridgway!

Congratulations on your 1000th! Great beetle and super nice shots!

Congratulations on #1000! Beautiful beetle and series too.

Thank you so much martinl!

These certainly deserve the name of Jewel beetle. This is a gorgeous specimen. Thank you and congratulations misako for your 1000 spottings.