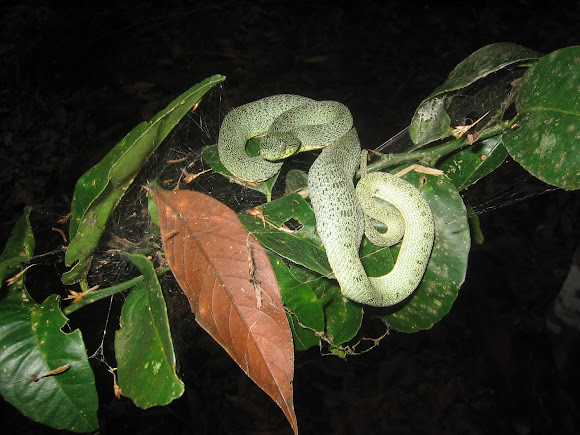 This is an arboreal lancehead pitviper that is responsible for many bites to the hands, head and upper body as people work in their gardens, reach into trees to pick fruit or walk under low hanging branches. They are almost invisible in the green foliage found in gardens as well as jungle trails. They are generally under 700 mm, with a few reaching up to 1 m. I measured one at 127 cm. They are uniformly green, varying from a pale green to a bluish-green color liberally speckled with black dots. Often there is a weakly defined postocular black stripe from the back of the eye to the corner of the mouth. There is a yellow line bordering the ventrals on each side from which it get the “Two-striped Forest Pitviper” common name.

This snake was found at night, obviously shortly after it had eaten, probably a tree frog. It was on the lower branches near a small stream in the Amazon rainforest of SE Ecuador (650 masl).

The family of lanceheads, of which this snake is a part, are highly aggressive vipers; among the very few snakes that can strike more than half the length of their body, often striking so hard that they literally pull themselves off the branch and fall, giving the natives the idea that they jump or drop on passers-by.

Not a problem Gaia. We have the same problem here. It's hard to change generations of cultural fear and superstition, but we keep trying 🐍

There's a lot of vipers in Sri Lanka, I hope to spot some of them once the curfews are lifted, but in general I'm dissapointed in how little knowledge the indigenous people have about nature. The pic is coming, but my family tried to kill a non-venomous "garter-snake", because they believed it was a viper, not ok anyway in my view, but I'm afraid that the decline of species we see today is purely because of the lack of knowledge of the serpent order and any order or genus. I'm also suspecting that the attempt to kill or catch species like this is also the main cause of bites and deaths in the world. As many snakes just flee from potential danger and does not attack unless threathened. After I saved the snake it didn't try to bite me even once, makes me a bit sad that totally non-aggressive animals get the death penalty because they belong to an order that is filled with superstition and disgust. Btw I don't jump on any snake I see, I noticed it had no venom-sacks and did some research before I picked it up. But I have made myself clear that no snake is to be harmed and have explained why they are important for the eco-system. Sorry...long comment...

Thanks Gaia. I believe that thought had occurred to him too 🙂

Nice spotting, looks like it's ready to jump on you too :)

You can add fangs to anything, Tukup. Just saying that reminds me of the man-eating plant in the Little Shop of Horrors. Good set of fangs there :)

You suppose I should add "fangs" to my profile picture? It looks good on Drop Bears 😊 Thanks Neil. I appreciate your comments.

Amazing spotting, Tukup. Love the notes too, particularly the bit when they jump on passers-by. That paints an awesome picture in my head :)

Thanks Ornithoptera. They are the prettiest of the vipers here.

Thanks Jae, pretty but dangerous.