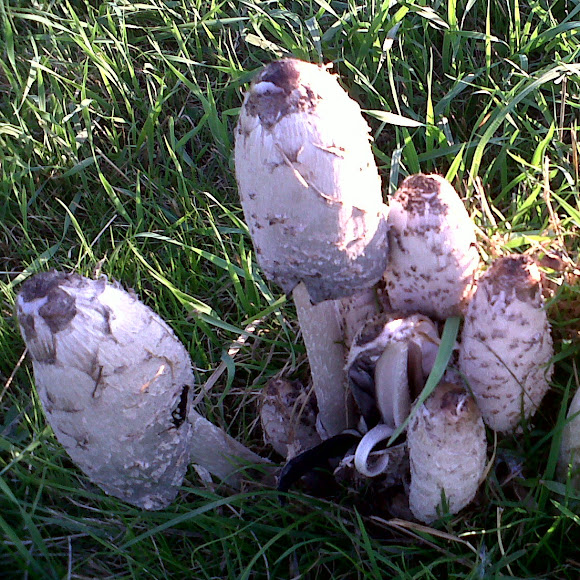 This common edible fungi is not to be confused with the 'Magpie fungus', which is poisonous. The Gills underneath the fungus, produce a black ink with spores in it. The plant reproduces by breaking itself down and so releasing the spores to the ground. Also, insects are attracted to the ink, who then carry the spores off with them.

Found on roadsides and waste areas, this fungi is at home in the grasslands and meadows of Europe and Northern America; although it has also been introduced to Australia, New Zealand and Iceland.

Found in a field. No notes taken as this happened before I joined Project Noah. All above citation - Wikipedia (please see link 'reference')

Oh thanks Emma, that's very kind of you. I really feel at home here with such nice people

Welcome to Project Noah.Nice to have talented person always.
Yes, Karen does have interesting spottings and is a wonderful person!

Hi Emma, yes will try. I love painting in unusual things. I have painted in bleach, summer berries, yogurt, cream, coffee, tea, and many more

Not now, I am following you too!

I guess I just have to follow you on PN

Karen, you see things laterally like me. There is always a different way of looking at something (in this case, literally). Hope we can keep in touch on PN.

Elizabeth Lichen is also used for ink and dyes!Looking forward to see your painting someday!

I figure most of us on PN have the skills to learn to mushroom safely. I sometimes ask people if they can tell the difference between a jay and a blue bird(and I confess I haven't taken a recent look at my mom's UK bird boook, so I don't know what similar equivalents might be for you). When they point at the jay and tell me its a blue bird, I smile and offer that mushrooming isn't for them.

I notice that shaggy manes tend to be a transitional weather species. I should start seeing some here in a few weeks

Hi Emma, unfortunately this picture was taken last year. I haven't seen any more since then. I wonder if the conditions have to be just right for them to flourish. If I do see any more, then I will paint a picture with the ink (I am an artist).

http://www.projectnoah.org/spottings/786...
Elizabeth,observe them thru the next week and you will see many changes. Also
You could try writing with the ink!! A message for us!

Thanks for that, you explain things really well. When you look at it like that, it makes sense. I will have to do my homework. I'll let you know how I get on.

I think it took me three years of working to identify them before I tried eating anything - even chanterelles. Basically, if you're relatively good at using a field guide, you can learn to ID the very safe ones, the ones for which there are no dangerous look alikes. Then you can make forays into the more difficult species if you wish. I've got about 10 I can eat safely, and they're all the very safe ones. So why branch out further?

Oh sorry, got hold of the wrong end of the stick there didn't I. I will have to try some. Just been really frightened in the past, incase I miss-identified and got poisoned.

No, thats MY comment. Shaggy Manes are absolutely wonderful edibles with a delicate mushroomy flavour and equally delicate texture. They degrade quickly, so when we find some, we joke about going home and heating the pan, so we can cut and saute them. It's not quite that bad but close...

Martini, I have updated the ID for this fungus, following your very useful information - thanks again.

Oh right, thank you Martini. I am learning something new all the time on this website.

KarenSaxton, sounds like your dog is just the same as mine - eat first, ask later.

Elizabeth, I am not an expert but I think that mycologists don't consider either term to be a meaningful definition. I always considered mushrooms to be the typical edible pink/brown gilled species and toadstools for anything else with stem and cap. That would make this a toadstool but that is a colloquial name.

Thanks Martini, so ...is this classed as a toadstool or mushroom please.

These are members of the 'ink caps' group and have black spores. They self digest and spores disperse by flowing away. This has been used as ink for writing. http://www.projectnoah.org/spottings/109...