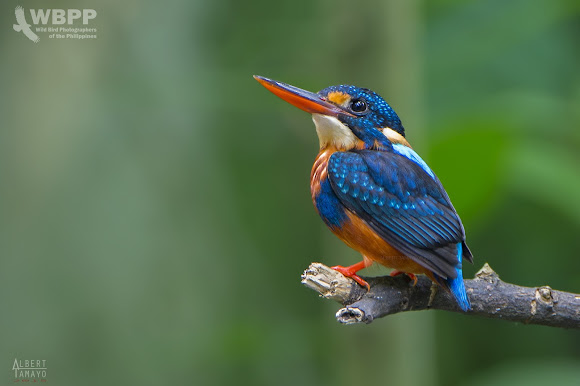 The indigo-banded kingfisher is a species of bird in the Alcedinidae family. It is endemic to the Philippines, where it is a generally uncommon but locally common resident of the northern and central islands. There are two subspecies, the nominate race, which occurs on Luzon, Polillo, Mindoro, Sibuyan and Ticao, and A. c. nigriostris, which is found in Panay, Negros and Cebu. The indigo-banded kingfisher feeds on fish and aquatic insects. It perches on rocks and overhanging branches and foliage and dives steeply into the water to catch its prey. Once caught, it returns the prey to the perch where it is beaten and swallowed. Little is known about its breeding behaviour, although it is known to nest in tunnels dug into the banks of streams and rivers.

I would love to see just one of these birds and you have a pic of 5 together. Wow, that is fantastic

@andreweleighton, the second image is a composite of 5 shots merged into one. https://www.flickr.com/photos/prodigi/16...
Thanks everyone for the nice comments and the faves. I have uploaded a new video of the same kingfisher catching a fish. Be sure to watch in HD for better video resolution. Thanks for watching. =)

I love the photo with them all on the line. Really cool.

It is so colorful!

Wow awesome capture and great video AlbertTamayo,congrats and thanks for sharing

Great images Albert and I love the video! Kingfishers always look like they have the hiccups :D Thank you for sharing :)