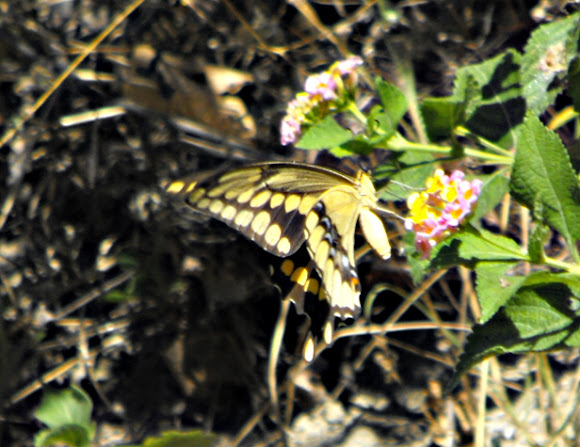 The Giant Swallowtail (Papilio cresphontes) is a swallowtail butterfly common in various parts of North America and marginally into South America (Colombia and Venezuela only). In the United States and Canada it is mainly found in the south and east. With a wingspan of about 10–16 cm (3.9–6.3 in), it is the largest butterfly in Canada and the United States. These are commonly called Giant Swallowtail, Orange Dog, or Orange Puppy. An adults wingspan is about 100–160 mm (3.9–6.3 in). The body and wings are dark brown to black with yellow bands. There is a yellow "eye" in each wing tail. The abdomen has bands of yellow along with the previously mentioned brown. Adults are quite similar to the adults of another Papilio species, P. thoas. The mature caterpillar resembles bird droppings to deter predators, and if that doesn't work they use their red osmeterium.These are 'horns' which they can display and then retract. The coloration is dingy brown and or olive with white patches and small patches of purple. Citrus fruit farmers often call the caterpillars orange dogs or orange puppies because of the devastation they can cause on their crops.

In the United States, P. cresphontes is mostly seen in deciduous forest and citrus orchards where they are considered a major pest. They fly between May and August where there are 2 broods in the North and 3 in the south. They can range from southern California, Arizona as deep south as Mexico north into southeastern Canada. Outside USA and Canada they are found in Mexico, Central America, Colombia, and Cuba. With the wikipedia link provided, you can see it's many sources of nectars and it's larval foods.

Giant swallowtails fly from Late May–August, but in some areas of the southern United States such as Texas and Louisiana, they may be seen as late as October. All giant swallowtails have a distinctive flight pattern which generally looks as if they are "hopping" through the air. Females tend to beat their wings slowly but move quickly. Because females have such large wings, each wing beat will carry it a long way. Males however, tend to have more of a darty flight and beat their wings rapidly but move slower than females because their wings are smaller and each beat doesn't carry them far. Giant swallowtails in general fly fast and high and can be difficult to capture. Spotted on a nature walk along the Medina River. I have seen the around my house too.

Thank you, dandoucette! I wasn't sure if it was recognizable or not. I keep seeing these little buggers every where but they won't sit still for long. They like to wait till I am unarmed and land right in front of me for 5 minutes, taunting me. ")