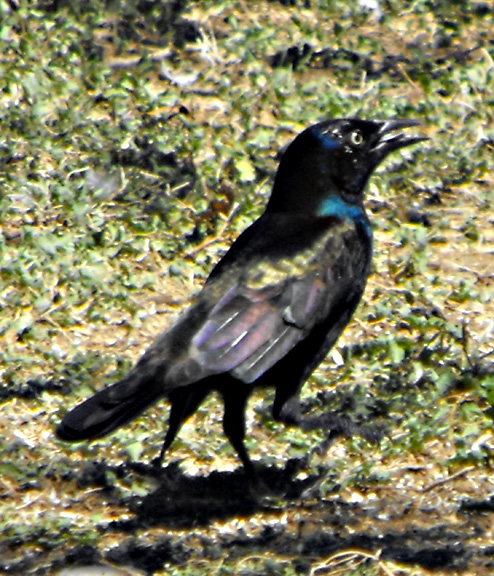 The Common Grackle, Quiscalus quiscula, is a large icterid which is found in large numbers through much of North America. Adult common grackles measures from 28 to 34 cm (11 to 13 in) in length, span 36–46 cm (14–18 in) across the wings and weigh 74–142 g (2.6–5.0 oz).[1] Common grackles are less sexually dimorphic than larger grackle species but the differences between the sexes can still be noticeable. The male, which averages 122 g (4.3 oz), is larger than the female, at an average of 94 g (3.3 oz).[2] adult has a long dark bill, pale yellowish eyes and a long tail; its feathers appear black with purple, green or blue iridescence on the head, and primarily bronze sheen in the body plumage. The adult female, beyond being smaller, is usually less iridescent; her tail in particular is shorter, and unlike the males, does not keel in flight and is brown with no purple or blue gloss. The juvenile is brown with dark brown eyes.

The breeding habitat is open and semi-open areas across North America east of the Rocky Mountains. The nest is a well-concealed cup in dense trees (particularly pine) or shrubs, usually near water; sometimes, the Common Grackle will nest in cavities or in man-made structures. It often nests in colonies, some being quite large. Bird houses are also a suitable nesting site. There are 4-7 eggs. This bird is a permanent resident in much of its range. Northern birds migrate in flocks to the southeastern United States. The common grackle forages on the ground, in shallow water or in shrubs; it will steal food from other birds. It is omnivorous, eating insects, minnows, frogs, eggs, berries, seeds, grain and even small birds and mice. Grackles at outdoors eating areas often wait eagerly until someone drops some food. They will rush forward and try to grab it, often snatching food out of the beak of another bird. Grackles prefer to eat from the ground at birdfeeders, making scattered seed an excellent choice of food for them. In shopping centers, grackles can be regularly seen foraging for bugs, especially after a lawn trimming.

I do know that these birds prefer to go straight to the source and get the seed out of the feeder. The problem is that most feeders are too small even for Cardinals. However, some learn to manage and others just take what the others throw down on the ground. I do have a larger hand made bird feeder that the Dove and Cardinals like to eat from but it is too close to one of my hang outs and the Grackles don't feel comfortable at it.

Me too, Andi! ") They are extremely fun to watch in parking lots.

I love grackles. On my drive home from work for the last 3 days I have seen a huge flock of them attacking a farmers corn field. Not good for the farmer, but a sight to see for me ^_~.