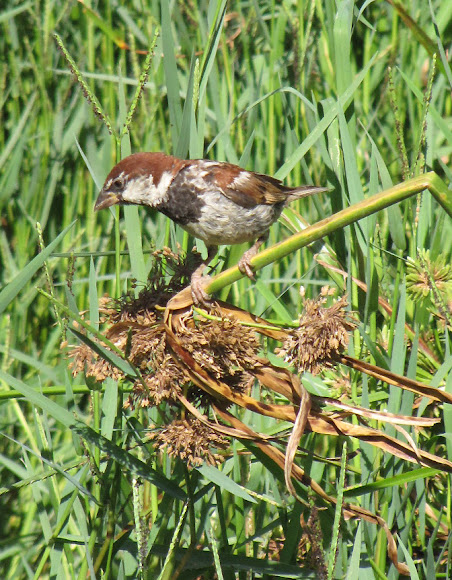 From Wikipedia: The Italian sparrow is a small chunky bird, with grey and brown plumage. The sexes differ in their plumage pattern, and slightly in length. The male has a head patterned like that of the Spanish sparrow, with a chestnut crown, nape and sides of head, and white cheeks. The male's upperparts are bright chestnut, and its underparts are pale grey, lacking the black streaking of the Spanish sparrow. The male has a black patch on its throat and chest, known as a bib or badge. This patch, like much of the male's plumage is dull in fresh non-breeding plumage and is brightened by wear and preening. The female is nearly identical to the female house sparrow, but it differs from the female Spanish sparrow in its lack of black streaks on the underparts

These birds were in a slightly marshy area in an archaeological site where people couldn't walk.

These birds have recently been established as a hybrid of, but a separate species from the House Sparrow and Spanish Sparrow. They look a lot like the Spanish Sparrow, but don't breed with them.