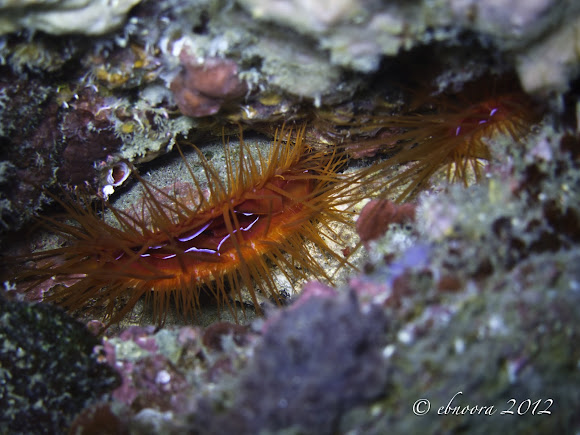 The Electric Flame Scallop ranges in size from 1 inch to 3 inches when reaching maturity and is instantly recognizable by its soft parts being a flame red color, with several bright red tentacles protruding from the open valves (shell). What makes this creature even more fascinating is that it seems to create bluish white electricity which can be seen shooting across the mantel like lightning bolts quite visibly in the dark. While the purpose of the Electricity generated by this creature is unknown, it makes a remarkable spectacle for any night dive where even in the darkness; you can see the flicker of bluish electricity bolts flowing through the scallop’s filaments. The electricity (which is actually a form of bioluminescence) is not known to be harmful to divers or other creatures, and especially since the electric flame scallop is a filter feeder and feeds off on microscopic phytoplankton and bacterioplankton (omnivorous) it is curious why it possesses such a brilliant ability. Marine Biologists suggest that the light generated by the electric scallop attracts plankton to its filament like tentacles helping it feed from a fixed location. Often the Electric Flame Scallop is confused with its parent species the Flame Scallop or Lima Scabra which is also similar in appearance, with a red fleshy mantle covered with tentacles, except for the absence of the strip of bio-luminescent tissue on its mantle that sends a flash of color back and forth over the mantle. Interestingly enough the Flame Scallop, and it’s sub-species the Electric Flame Scallop are not truly scallops but a form of file-clam. Source: http://aquaviews.net/explore-the-blue/th...

Spotted at a small hole at a depth of about 22m. Ligpo, Batangas, Philippines.

Yes Leuba, it is. Lucky to be here in the tropics and glad to share :-)

what a creature ! -like lightning flashes, quite intimidating yet attractive. You guys are so lucky and so good to share this with all...

Thanks Bloggie. Oh and congrats on yet another SOTD :-)

Gracias Gerardo. The accompanying video shows why it is called "electric" and why it is a sight to behold underwater. Unfortunately don't have a strobe so couldn't get the colors right :-)