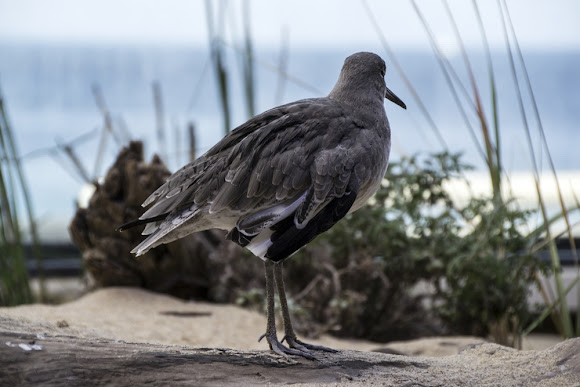 Seen at the Monterey Bay Aquarium. "Piercing calls and distinctive wing markings make the otherwise subdued Willet one of our most conspicuous large shorebirds. Whether in mottled brown breeding plumage or gray winter colors, Willets in flight reveal a bold white and black stripe running the length of each wing. These long-legged, straight-billed shorebirds feed along beaches, mudflats, and rocky shores. Willets are common on most of our coastline—learn to recognize them and they’ll make a useful stepping-stone to identifying other shorebirds."

"In winter, Willets feed on beaches and rocky coasts, as well as mudflats and marshes. During breeding season the western population moves far inland to nest in grasslands and prairies near freshwater. Eastern Willets breed in coastal saltmarshes and on barrier beaches and islands."