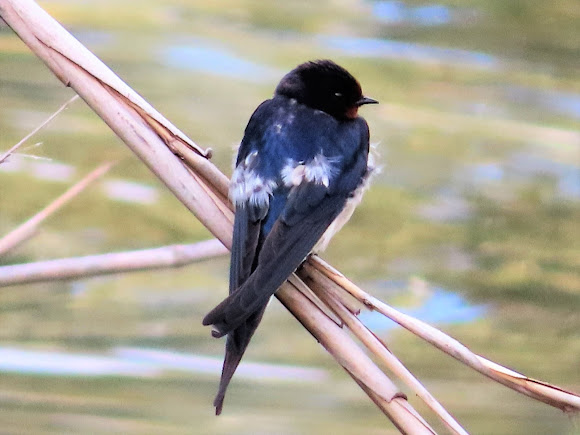 Delicate, graceful and streamlined bird, black in color, with metallic blue reflections above and cream-white below. He has a red forehead and throat and a black collar. The wings, long and pointed, show white tones in the lower front part. Its tail, very long and forked, is black, with small white ovals when it is extended. It has short, featherless legs, a very wide mouth, and a short, flat, black bill. It presents latitudinal variation in body size and tail length, which are smaller towards the south. Although both sexes look alike, the female is less shiny, whiter underneath, and has a shorter tail. Juveniles sport matte black tones, have orange foreheads and throats, and a much shorter tail. Of agile, fast and acrobatic flight, the common swallow occupies the lower layers in the airspace, below airplanes and swifts.

Old riverbed in an urban garden in the city of Valencia.

It is one of the most popularly known birds and one of the best studied. Swallows have been key to unraveling aspects of migration, sexual selection and reproduction in birds. Due to their proximity to humans, they are part of popular culture, and their arrival, increasingly earlier as a result of climate change, is considered the announcement of spring. Despite its abundance, it is a species in decline, mainly due to changes in rural areas and agricultural policies and techniques.