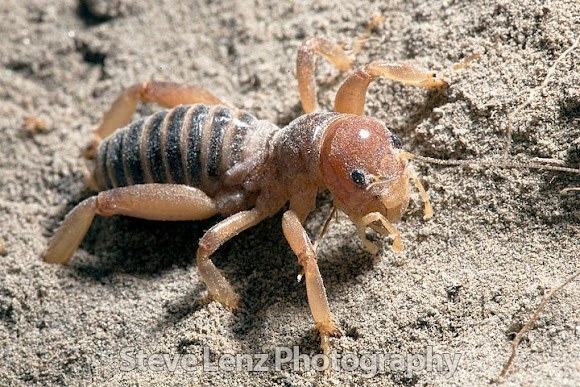 Jerusalem crickets are a group of large, flightless insects of the genus Stenopelmatus. They are native to the western United States and parts of Mexico. Its large, human-like head has inspired both Native American and Spanish names. Despite their common name Jerusalem crickets are not true crickets, as they belong to the family Stenopelmatidae while the latter belong to the family Gryllidae; they are not native to Jerusalem. These nocturnal insects use their strong mandibles to feed primarily on dead organic matter but can also eat other insects.[2] Their highly adapted feet are used for burrowing beneath moist soil to feed on decaying root plants and tubers. While Jerusalem crickets are not venomous they can emit a foul smell and are capable of inflicting a painful bite. (Wikipedia)