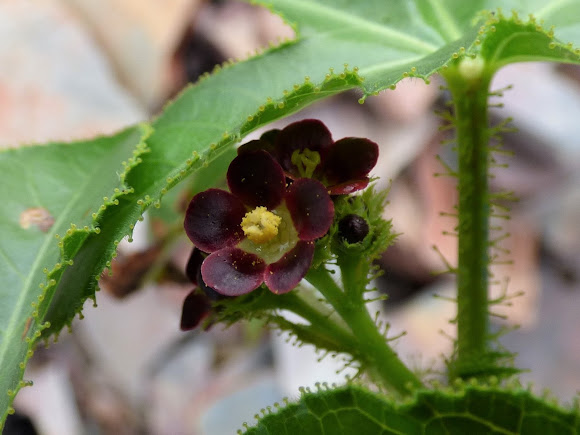 Growing in the water with others growing on the slate like rocky/scree slope at Lake Argyle, East Kimberley. Lake Argyle "[and Lake] Kununurra Ramsar Site comprises an extensive system of artificial freshwater reservoirs, with their associated permanent wetlands, formed by damming the Ord River in the eastern part of the Kimberley Region of northern Western Australia. The reservoirs include Lake Argyle and Lake Kununurra. There are numerous endemic plants and a rich fauna. The 1,500 km2 (580 sq mi) site was designated a wetland of international importance under the Ramsar Convention on 7 June 1990, making it Ramsar Site 478." (Wiki - https://en.wikipedia.org/wiki/Lakes_Argy... )

These pics were taken while kayaking on Lake Argyle towards the end of the wet season. Thank you Irena Hrovat for the identification!!! Bellyache Bush is a declared pest in both Western Australia and Queensland. "Bellyache bush is regarded as one of the worst weeds in Australia because of its invasiveness, potential for spread, and economic, environmental and social impacts. Bellyache bush forms dense thickets, particularly in riparian areas, such as river banks. It invades beds and banks of ephemeral watercourses, floodplains, open woodland and grassland. Productive river frontages are often most at risk of invasion. It also takes over productive grazing land, reduces biodiversity and restricts access for activities such as mustering and recreation." (http://weeds.ala.org.au/WoNS/bellyachebu... ) Here is a little bit of information about medicinal use but also check out this link for some great reading about other medicinal uses of this little plant (a pest in Australia but medicine elsewhere...): "The sap has a widespread reputation for healing wounds, as a haemostatic and for curing skin problems; it is applied externally to treat infected wounds, ulcers, cuts, abrasions, ringworm, eczema, dermatomycosis, scabies and venereal diseases. The sap has a styptic effect and is used against pains and bee and wasp stings." (http://database.prota.org/PROTAhtml/Jatr... )

This is the perfect group for your spotting, Liana. Launched this morning - https://www.projectnoah.org/missions/238... This bush is the epitome of invasive!

Ah, ok. I will remove it from the "Australian Native Flowers and Fruits" mission. Thanks Neil!

I've never heard of this plant before. Awesome notes and reference links, Liana. It sounds like a absolute mongrel of a plant in all the wrong areas. It has been naturalised in northern Australia, but isn't a native species.

Photo No. 5: is a beautiful landscape photo....

Thank you Irena for the identification. I missed your id completely! But I have now been able to add a lot more information which is wholly satisfying :D Liana

Cheers thaptor :) I will keep digging and see if I can find an id...

I'm fairly sure it belongs in Malvaceae
http://bie.ala.org.au/species/http://id....