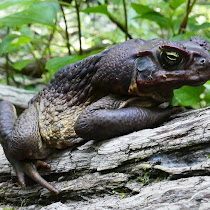 The aim of this mission is to highlight SPECIES THAT HAVE INVADED AUSTRALIA. To define an invasive species: "It is an organism that causes ecological or economic harm in a new environment where it is not native. Invasive species are capable of causing extinctions of native plants and animals, reducing biodiversity, competing with native organisms for limited resources, and altering habitats... They can be introduced to an area by ship ballast water, accidental release, and most often, by people." (NOAA website) Sign in to join mission

Invasive species are animals or plants from another region of the world that don’t belong in their new environment. They can lead to the extinction of native plants and animals, destroy biodiversity, and permanently alter habitats. This mission is for spottings that fit the definition of an invade species. Consider that some may even be Australian species, but are displaced. How has habitat been affected by these invaders? Details are important. NB: Australia is a mighty big place, so if your spotting falls outside of the mission radius, it is still welcome!