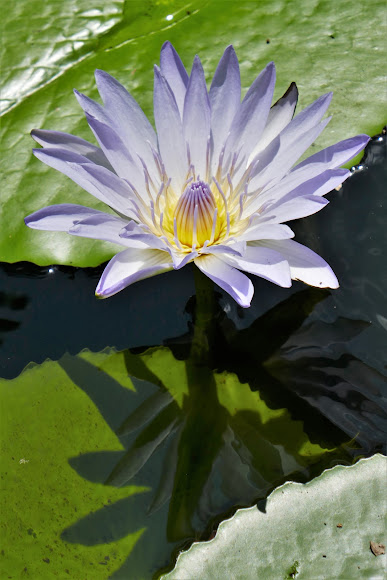 Nymphaea caerulea ssp. zanzibarensis, commonly known as the "blue water lily", the "cape water lily" and the "blue lotus", is native to north-eastern, eastern and southern Africa, but is an invasive species in Australia. Most of the Australian native water lilies have disappeared over the years in southern Queensland and NSW, having been displaced by Nymphaea careulea, as was the case of Nymphaea gigantea, almost to the point of local extinction in southeast Queensland. However, it can be controlled with effort. Mt. Coot-Tha Botanical Gardens (where this spotting was made) had Nymphaea gigantea reappear again after a massive cleanout of their ponds where the invasive Nymphaea cearulea had once taken hold. Once the ponds were cleaned, Nymphaea gigantea reappeared, having stayed dormant for many years. Another local case was at Enoggera Reservoir in Brisbane's west. Some years ago many of the top-shaped tubers were eaten by feral pigs during a period of low water, and now it is mainly replaced by the strongly competitive and equally invasive Nymphaea mexicana, the "yellow water lily".

Spotted in one of the ponds at the Brisbane Botanical Gardens, Mt. Coot-Tha, in a well-established sub-tropical rainforest section of the gardens. This plant has escaped cultivation and become a weed of freshwater habitats (dams, ponds, lakes, lagoons, wetlands, and slow-moving waterways), where it displaces similar native species. Will we ever learn?

Another local species is Nymphaea violacea, also commonly known as "blue water lily", and is very similar in appearance to this one. I never knew how to tell the difference until now, and the answer lies in the lily pads, not the flowers. The native species has a wavy margin to the leaf, rather than a toothed or serrate margin (last photo) of the introduced species. A very good local reference - https://weeds.brisbane.qld.gov.au/weeds/...