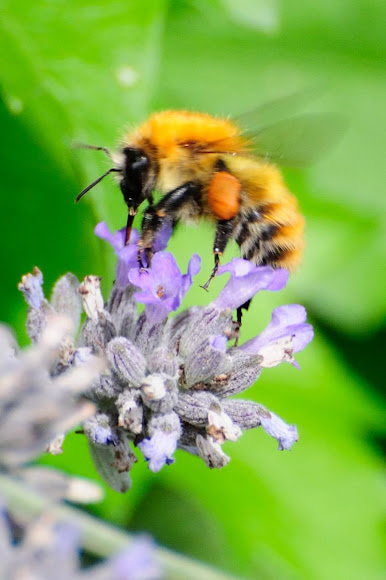 Bumblebee belonging to the family Apidae subfamily Apinae tribus Bombini. The body size is 9–15 millimetres in the case of a worker. Its wingspan 20–28 millimetres. The thorax is yellowish or reddish-brown. The first 4 abdominal segments have grayish hair, while the fifth and sixth tergite hairs are yellowish or reddish brown. However the species is quite variable in color. Queens appear between early April to mid-May, workers at the end of April/early May to mid-October. When Queens search for suitable places to nest, they fly just above the vegetation, for example on forest edges, investigating cavities such as holes in the ground or niches in dead wood and grass. Nest-building proceeds as follows. The Queen collects moss and grass to form a small, hollow sphere whose walls are partly bonded with wax and sealed off. Within this is formed a large bowl of brown wax of about five millimeters, which is filled with pollen. Thereafter 5 to 15 eggs are deposited, and the cell closed. Another 20 mm-high cup is then filled with nectar, thus serving as its own food reserve for bad weather days. After three to five days the larvae hatch to feed on the pollen. After about a week the larvae are mature. The adult bees, owing to the initially poor supply situation, are relatively small, reaching only about half the body length of the Queen and lacking functioning ovaries. Later hatching bees are much larger. The additional nesting and brood care is dedicated solely to the Queen, which no longer leaves the nest. From August, rarely before, the first fully developed females, together with drones, are ready. Drones hatch from unfertilized eggs. In August the pascuorum nest, with a diameter of up to 15–20 centimetres, reaches a maximum population size from 60 to 150 individuals. Shortly after this peak, the population quickly decreases. With the Queen the entire nest dies, usually in September. Occasionally, individuals survive until October/November. Only the last-hatched females survive, to mate with males. Then they fly in search of a safe place for hibernation. This polylectic bee feeds on a variety wild flowers, including Nettle (Urticaceae), Genuine Motherwort (Lamiaceae), Himalayan Balsam (Balsaminaceae), Cabbage Thistle, Knapweed (Asteraceae), Vetch, Red and White Clover (Fabaceae), Monkshood (Ranuncolaceae), fruit trees, etc.

Spotted at the backyard garden