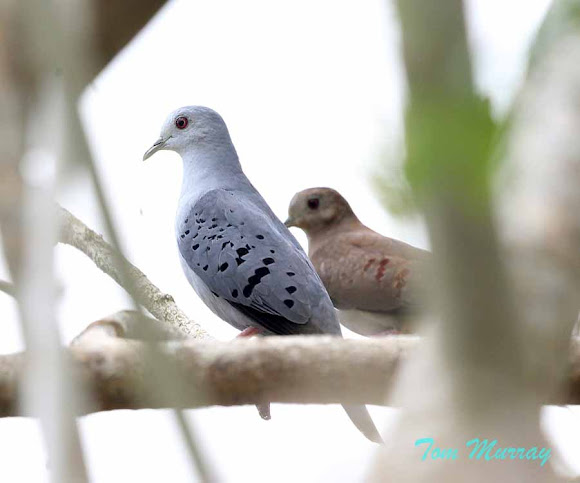 The Blue Ground-Dove is a widespread, handsome small dove of open woodland and clearings. It occurs from Mexico south to northwestern Peru and, east of the Andes, south to northern Argentina. The male is pearly blue-gray overall, with black spots on the secondaries and wing coverts, and entirely black primaries. The female is cinnamon-brown, with a rufous rump, dark brown spots on the secondaries and wing coverts, and blackish primaries. The association of the bluish male and rufescent female is often the first clue to identification, and pairs are often seen flying together at low levels through vegetation. The somewhat monotonous, repeated coo is another good indicator of this species' presence. The Blue Ground-Dove feeds on seeds and arthropods, usually alone or in pairs or family groups. The nest is made of small sticks and placed in a tree or shrub. (Cornell)