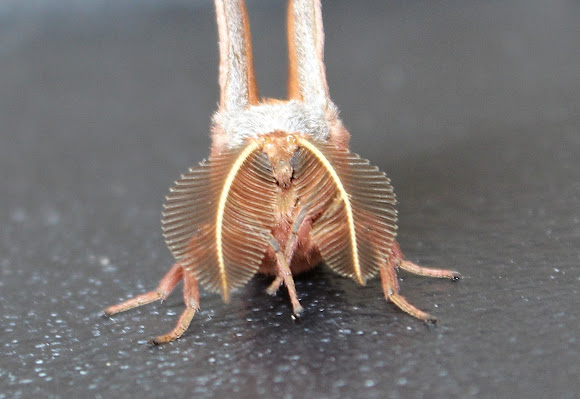 Male Polyphemus silk moth drying its wings one morning at a convenience store-gas station, which are good places to spot moths of all kinds, probably because undisturbed crannies in windows & overhangs look like suitable places for cocoons. Maybe also because of the bright lights ...

* Common in the United States, Mexico and southern Canada. Favorite foods include the leaves of oak, hickory, elm, maple and birch.

* Considerable variation in color from reddish cinnamon to dark brown. Most notable feature are two large, dark eye spots on its hind wings. The spots give the moth its name, from the Greek myth of the Cyclops Polyphemus, from whom Odysseus and his men escaped. The eye spots are a distraction pattern meant to confuse predators -- maybe looks like an owl's head and eyes.
* Two broods hatch each year, in early spring and late summer. During two months as a caterpillar, Antheraea polyphemus can eat 86,000 times its own weight and grow to be 3-4 inches long in five instars.
* Adults are huge, with an average wingspan of 6 inches. They have vestigal mouths, don't eat and live only about a week. Males use their plumose antennae to locate females and mate.

Thank you, AshleyT, it's an honor to be nominated for SOTW! Spotting this moth made my day. I was on my way into work. Starting my day by spending a few minutes with this handsome fellow was a welcome surprise.

Thank you, Christine Y, so ... flamboyant.

Love the face shot - those antennae are fabulous!

Thanks very much, Brian38. I would have loved to stick around longer and watch. But I couldn't. Had the wrong lens for the face shot, but did it anyway ...