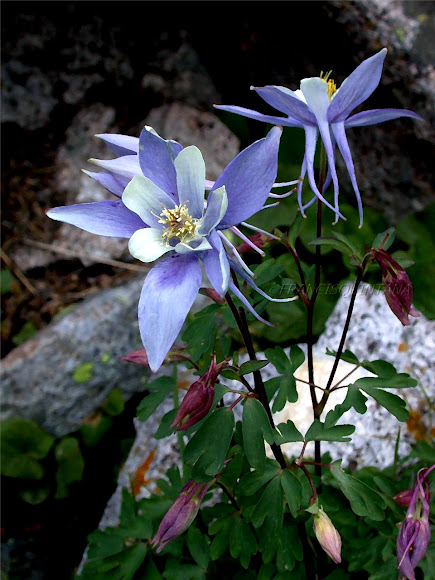 A genus of about 60-70 species of perennial plants that are found in meadows, woodlands, and at higher altitudes throughout the Northern Hemisphere, known for the spurred petals of their flowers. They are used as food plants by some Lepidoptera (butterfly and moth) caterpillars. These are mainly of noctuid moths – noted for feeding on many poisonous plants without harm – such as Cabbage Moth (Mamestra brassicae), Dot Moth (Melanchra persicariae) and Mouse Moth (Amphipyra tragopoginis). The Engrailed (Ectropis crepuscularia), a geometer moth, also uses columbine as a larval foodplant.

Columbine is a hardy perennial, which propagates by seed. It will grow to a height of 15 to 20 inches. It will grow in full sun; however, it prefers growing in partial shade and well drained soil, and is able to tolerate average soils and dry soil conditions. Columbine is rated at hardiness zone 3 in the USA so does not require mulching or protection in the winter. Large numbers of hybrids are available for the garden, since the British A. vulgaris was joined by other European and North American varieties. Aquilegia species are very interfertile, and will self sow. Some varieties are short-lived so are better treated as biennials. The following hybrid cultivars have gained the Royal Horticultural Society's Award of Garden Merit:

The genus name Aquilegia is derived from the Latin word for eagle (aquila), because the shape of the flower petals, which are said to resemble an eagle's claw. The common name "columbine" comes from the Latin for "dove", due to the resemblance of the inverted flower to five doves clustered together. The flowers of various species of columbine were consumed in moderation by Native Americans as a condiment with other fresh greens, and are reported to be very sweet, and safe if consumed in small quantities. The plant's seeds and roots are highly poisonous however, and contain cardiogenic toxins which cause both severe gastroenteritis and heart palpitations if consumed as food. Native Americans used very small amounts of Aquilegia root as an effective treatment for ulcers. However, the medical use of this plant is better avoided due to its high toxicity; columbine poisonings may be fatal

Great shot of this amazing flower! :-)

Thank you for the comment smcrenshaw.
The Rockies are very beautiful and should be missed

Makes me miss the Rockies...